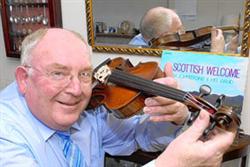 The name may not be instantly recognizable, but how about Rory MacLeod? He is instantly familiar to Box and Fiddle readers as a star photographer and Club enthusiast of the highest order! Rory took up the accordion as a teenager at home near Ullapool and played at weddings and ceilidhs regularly with other local players. It is not well known, but Rory also played drums in various bands when needed and can still rattle the drums when he is in the mood.

Rory was working at Lochcarron when he first met the legendary bandleader Jim Johnstone. Their close friendship was to last for many years and Jim wrote a tune in his honour.

Rory moved to Inverness, where he was a sales rep with car dealer MacRae and Dick. He met with many like-minded folk, both players and enthusiasts, and Highland Accordion and Fiddle Club was founded by the late Alistair Watters on 19th November 1973 in The Cummings Hotel. Their very first guest was none other than Rory’s pal, Jim Johnstone. When the Club began there were between eighty and a hundred members on the books and it has risen to around 160 members. Sometime the audience can number as many as two hundred. Rory was MC for a long number of years and remained Chairman for almost as long. He retired as Chairman in June 2008 and was made an Honorary Life Member of the Highland Club to mark the occasion.

He produced the Club’s own Highland Showtime at Eden Court Theatre in Inverness for a number of years. He made all the arrangements for these events and did all the producing, arranging of artistes, fees, publicity etc and was exceptionally talented at it. Full houses at every show were testimony to this.

He was approached by BBC Radio Highland late in 1985 and on the 15th January 1986 ‘Rory’s Reel’ went out as a pre-recorded programme. Only three pre-records were ever made and transmitted, and the rest (amounting to over 300) went out live. Rory chose all of the music to be played on these shows and initially started with a half hour slot, before moving on to hourly broadcasts, due to its popularity and the large audience figures it had attracted. He had several invited guests on the show over the years, including many of the top names from the scene, most of whom still keep in touch as friends. The programme finally ended in January 1993 and he found the last programme to be a very emotion al affair, bringing tears to his eyes. He always finished with the catch phrase “I’ll be here if you’ll be there”.

Nowadays he is equally at home with a camera and is a regular and valued contributor to the Box and Fiddle Magazine, with photographs from all over the country, but notably of Club nights at the Highland Club in Inverness. Rory has also been one of the official photographers of the NAAFC AGM for several years. This year he has contributed photographs to be part of a special exhibition at the AGM. Rory can frequently be seen driving taxis around Inverness, although he tends to leave the Friday and Saturday night business to others and sits at home with a good single malt listening to his beloved Scottish dance music!