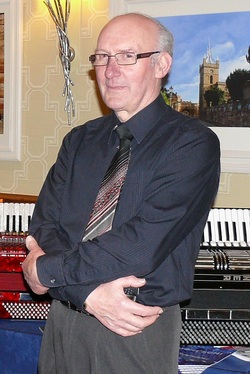 1942, the darkest days of the War. Britain stood alone, facing the might of Nazi Germany who held Continental Europe in her iron grasp from the Channel Coast to the gates of Stalingrad. At sea German U boats, operating with apparent impunity from massive concrete lairs on the French coast, were sending one million tons of allied shipping a month to a watery grave at the bottom of the Atlantic and it appeared only a matter of time until Britain was brought to its knees.

Other than that, life in the sleepy hamlet of Lochfoot, near Dumfries, continued pretty much as it had for a hundred years and nowhere perhaps more so than Deanston Farm where the only interruption to routine during the war was the arrival of a new son to Bob and Edith (‘Bell’ to her friends) Douglas whom they names John. Hence one of ‘the best known and respected Borders musicians’ came into the world in those austere times. Fortunately, this was not to reflect on his personality.

John was born into a musical family. Dad was a fiddle and melodeon player while mum played the piano. Schooling was received at Milton Primary School and Dalbeattie and New Abbey Secondaries up to the age of 15 when full-time farming work began.

A year later however, the family uprooted and moved to Lochaber, or more specifically to the ‘Great Glen Cattle Ranch’ the brainchild of eccentric American millionaire Joseph Hobbs. Both Dad and John, during what I suppose could be called their ‘YEE HAA’ period worked as ‘cow pokes’ (my words not John’s) when under the stern eye of Old Man Hobbs – seriously, horses and all, although when he wasn’t around they just got on with beef farming as any normal Scottish farmer would.

Not surprisingly perhaps the whole venture went bust after about three years and John moved from ‘ranching’ to ‘the plantations’ – the new ones being planted by the Forestry Commission in the Spean Bridge area in this case. Another couple of years down the line and John moved back to Dalbeattie in his native Dunfriesshire as mechanic at Carswell Mill (no, animal feedstuffs this time, not molasses).

The more observant amongst you will have noted a distinct absence of music pertaining to John up to this point and that was because there wasn’t any. He had taken lesions briefly, for three months in fact, from James Mason in Dumfries before moving to Lochaber but although he kept his Hohner Arietta it lay unused. John was therefore in his twenties when local accordionist Graham Barbour had need of a second box player. No one locally was available, so John acquired a Hohner Verdi and reading chords written out by Graham, learned in what would be termed in today’s jargon by ‘on the job training’ eventually branching out with his own band when Graham got married.

His more familiar daytime role as accordion salesman came about purely by chance in 1972. John was visiting Jimmy Clinkscale’s Melrose premises to buy a Domino Morino V when Jimmy mentioned a vacancy for a manager for the music shop they had just acquired from Len Frobisher in Dumfries. Jimmy asked John if he was interested and in due course he got the job (although he declined to say whether he bought the Morino on that first visit or waited for a staff discount!) Eighteen months later however Len bought the business back from Jimmy but John stayed on as Sales Assistant.

A couple of years down the line, around 1976, Len sold out to Thomson’s Music from Glasgow for whom John became Manager. That lasted until 1983 by which time the writing was on the wall so he left to set up his own business in Munches Street. That first business was slightly on the small side John admits or as he puts it “I could stock a Morino IV but not a V”.

Larger premises became available in Great King Street and that’s where you’ll still find him today. For me no visit to Dumfries is complete without a visit to John’s shop. In addition to being well stocked with accordions and keyboards, music, PA and accessories it’s a chance to catch up on the latest happenings, and just in case anyone reading this article is surprised by its apparently flippant tone, be prepared for John’s well developed sense of humour – he takes no prisoners.

John and wife Margaret have two of a family, John and Katrina, both of whom are competent keyboard players but show no signs of making much commercial use of their skills. Being busy running a business and playing regularly in the evenings has its drawbacks of course, and John jokes that like any busy musicians wife, Margaret regularly supplies the family with up-to-date photographs of their dad so that they’ll recognise him if they pass in the street!

In line with many bands in Dumfriesshire John uses a midi accordion, a singer and because of the shortage of drummers, a workstation to provide the rhythm for routine jobs although he covers Country Dancing with a more conventional line-up. On second box he has broadcast with Ian Muir and Max Houliston. Questioned about the highlight of his musical career he said it had to be a week long trip to Ireland in the early ‘80’s as a member of Bill Black’s Band. The ‘gigs’ were good but it’s the ‘dig’s’ that stand out in John’s memory mostly for all the wrong reasons I suspect (like the morning Bill ate three breakfasts).