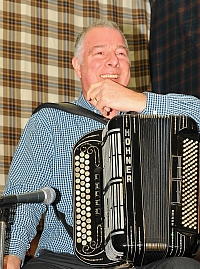 Originally from the island of Iona, Charlie is now resident in Giffnock. While at secondary school in Oban, he taught himself to play the accordion on a 2-row Hohner Double Ray Black Dot  melodeon and later progressed to a Hohner Gaelic IV 3-row button key accordion. On joining the City of Glasgow Police in 1965, Charlie moved to the Glasgow area where he still resides. After a career in the Police Service, Charlie retired in 1995 and took up a position in retail as Security Controller. Now completely retired, he  passes his time on the golf course, in his garden and also playing at gigs. Charlie  plays a black Hohner Shand Morino (dated at around 1956/1957)  formerly owned by Willie Wyllie who was the accordion tuner/repairer with McCormicks Music Shop in Glasgow. Charlie has appeared as guest artiste at most Accordion & Fiddle Clubs around Scotland with his trio. He passed the audition for BBC Radio Scotland’s Take the Floor in 1981 and has since taken part in over twenty broadcasts with his band.