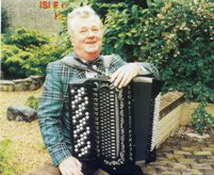 Calum was born in Tobermory, Isle of Mull in 1934. The youngest of a family of eight, he was given a single row melodeon at the age of nine. As a result of managing to play a few tunes he progressed on to a 2-row Hohner accordion. Having played this diatonic accordion for some time Calum's father decided to buy him a 3-row continental accordion which Calum persevered with, teaching himself to read and write music. Calum started playing at local concerts and dances in Tobermory and by the 1970's was performing on BBC TV and Radio. Over the years Calum has owned several 5-row instruments - including a Hohner Gola and Roland Digital V Accordion. In 1970 he performed successfully at the Coupe d' Europe in Bad Godesberg, Germany. He has recorded several albums for Lismor Records and is a fine composer of well over 300 pieces. Calum and his wife Jean have been married for over 50 years and his son Calum Jnr is now keeping up the family musical tradition.