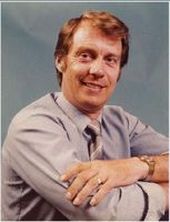 Robin was born at Thorntonloch near Dunbar and he was in his his late teens before he bought a guitar which was his first musical instrument. Around 1958 he joined Andrew Stoddart’s band, ‘The Glenesk’ - later becoming the band's string bass player, and at the same time he played rhythm guitar in ‘The Andy Russell Seven’. In the early 60’s he met Jim Johnstone and performed bass in his band with Bobby Colgan on drums, David Flockhart on piano and Alan Johnston on fiddle. Robin toured with ‘The Corrie Folk Trio with Paddie Bell’ in 1964  and later performed with them on several TV shows. He went to appear on TV regularly with Jimmy Shand's Band and on radio with Jim MacLeod. Playing lead accordion he made his first BBC Broadcast in 1972 and completed about a dozen broadcasts over the next few years. He then went on to present radio shows ‘Pure Scotch’ and ‘Folks Around Robin’ on Radio Forth. Robin has spent a lifetime in Scottish music as bass player, accordionist and broadcaster (from both sides of the desk) and is a fine composer of several popular tunes including  ‘Miss Linda MacFarlane’ and ‘McCrostie Park’.