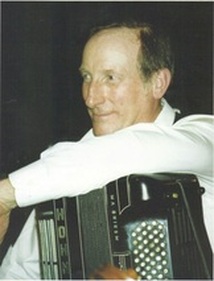 Hamish Smith was born in Glenfarg in November 1945, the youngest of four children. At the age of seven Hamish and his brother Stewart  started accordion lessons with Bill Wilkie in Perth. After performing with the Bill Wilkie Accordion Orchestra his first gig with a Scottish Dance Band was at the age of sixteen with Drew Simpson of Milnathort. Since then he has performed on second box with several bands including Jimmy Shand, Angus Fitchet, Bobby Crowe, Simon Howie, Bill Black, Nicol McLaren, Jim Johnstone, George Meilkle and David Cunningham. In 1966 he joined Rob Gordon's Band, playing on Rob's first CD two years later. In 1969 he joined Jimmy Shand Jnr's Band and so commenced a forty three year association between the two. He started playing with Sandy Nixon in 1989 and they have played all over the world together as far away as Oman, Vienna, Seattle and Madeira. Hamish is an auto electrician and is married to his wife Rita. They have four daughters - Donna, Sharlene, Tracy and Cheryl.

Hamish Smith
by Nicol McLaren
​B&F May 2014
James Christie Smith was born in Glenfarg in November 1945, the youngest of four children.  The three boys and sister Zella all went to piano lessons with Miss Stevenson in Glenfarg before, at the age of seven, Hamish and eldest brother Stewart started accordion lessons with Bill Wilkie in Perth.  Since then, Hamish has gone on to be one of the most respected second accordionists on the scene.  Although we mostly associate Hamish with Sandy Nixon or Jimmy Shand Junior’s bands today, he has played  with many bands over the years, including Jimmy Shand, Angus Fitchet, Bobby Crowe,  Simon Howie, Bill Black, Nicol McLaren, Jim Johnstone, Rob Gordon and David Cunningham, to name but a few.
Hamish played with Bill Wilkie’s Accordion Orchestra before his first gig with a Scottish Dance Band, when he was sixteen, with Drew Simpson, a Shand Morino player from Milnathort.  However, he says his real “grounding” in the Band Scene was with The Hawthorn Band.  He used to “sit in” with the band at local events and became the “Live Entertainment” at half time.  He still remembers when Andy Tosh first appeared with his Domino Morino.
Hamish did have his own band for a short time but was in such demand as a freelance second box player that he didn’t have time for his other gigs!  He did, however, have a time as part of a duet entertaining in the Miners’ Clubs in Fife with singer Jim Hosie, also from Glenfarg, calling themselves “The Glen Lads”.  It could have been such a different career had The Tartan Lads and The Alexander Brothers not muscled in on the idea.
He joined Rob Gordon’s Band in 1966 and played on Rob’s first LP two years later.  In 1969, he joined Jimmy Shand Jnr and so commenced a forty-three year association between the two – and, he says, never a cross word!  Similarly, he started playing with Sandy Nixon in 1989 and has been a fixture in the band ever since.  He still remembers his first gig with Sandy, in Edinburgh, with a “makey-up” band of Sandy, Hamish and Alan Rintoul, his services having been secured at the very last minute.  The accordionists immediately gelled and in twenty-five years have played all over the world together, as far away as Oman, Vienna, Seattle, Korea, Prague, Madeira… and Ardrishaig.
Away from playing, Hamish is an auto electrician, having served his apprenticeship at Calderwood’s of Perth under Jim Powrie, brother of Bill and Ian Powrie.  Hamish says Jim was the only one in the Powrie family who didn’t play anything!  Apart from a couple of years when he became an owner/operator long distance lorry driver, travelling all over Europe, he has remained dedicated to his profession, working on cars, boats, lorries and buses until he retired after sixteen years with Dundee Council, looking after the electrics on their fleet of buses.  He didn’t work only locally though, but had spells working in Shetland, keeping the buses running to and fro from the then construction site of Sullom Voe, and in Rhodesia (Zimbabwe) keeping trucks running for an Aberdeen company.  He still wouldn’t be without his accordion and took it out to Africa in its standard Hohner case.  “Airlines were a bit more careful with luggage in those days,” he says.
Speaking of accordions, Hamish has owned only three. Firstly, he started with a Hohner Verdi, had a spell with a Hohner Atlantic before, at the age of eighteen, acquiring his trusty, domino couplered, Hohner Morino VM, which has been his companion ever since.  It wasn’t a new accordion and there was a bit of competition to buy it but Hamish just beat Mickie Ainsworth to the purchase.
In 1964, Hamish met his future wife Rita Lesslie – as a result of a snowball fight!  Hearing this lad making cheeky comments towards her from his car, Rita decided to “answer back” by firing a snowball through the open window and catching Hamish a “beauty”.  The ensuing playful chase down Kinross High Street ultimately resulted in the pair being married a few years later. Subsequently Hamish was surrounded by “his girls”, being blessed with four daughters, Donna, Sharlene, Tracy and Cheryl and now seven grandsons and one granddaughter.  All four of the girls played piano, and two also had a spell learning accordion with Donna having lessons from Peter Bruce and Cheryl with John Huband.
When asked about his “style” as a second accordionist, Hamish says it depends on who he is playing with.  His job, he says, is to complement the style and feeling that the band leader is conveying and so is different with every band.  His advice?  “Listen and Accommodate!”  He says his greatest influence as a second accordionist was Jack Delaney – “I’ll never be a Jack, but I’ve used his technique as my inspiration.”
When asked about his most memorable gigs, Hamish says there really are too many to mention but maybe two different gigs come to mind, both with Jimmy Shand Junior.  Firstly a night in Hammersmith Palais with over 2000 in the audience – and Jim Johnstone on piano,  “What a buzz” and a tour of Ireland in 1969/70 at the height of the troubles in Northern Ireland where the music seemed to bring the people together.
Hamish sees today’s scene as very different to when he started.  “There are fewer people dancing, in particular young people, fewer regular established bands, and fewer players in the bands.  I fear that, as the audience ages, the young players may lose the greatness of our traditional dance music.”
“Would I do it all again?  Absolutely!  I still get a real ‘buzz’ every time I’m out for a tune.”
Hamish, long may that continue.