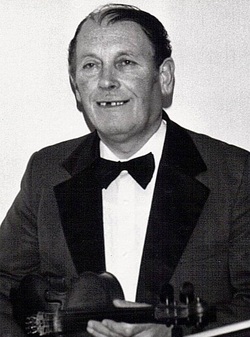 Addie was born the youngest of four at Stirkoke, near Wick, his dad being a single-row melodeon player who performed many West Coast melodies picked up from Lewis and Harris men who had worked alongside him in  Argentina. Addie was gifted an old fiddle at the age of 5 but he was 12 before he started lessons with Margaret Henderson of Wick. He played initially with the newly formed Bilbster Band but, in 1950, with dance band work spiralling, decided to form his own band and teamed up with accordionist Billy Dowler, pianist Sandy Meiklejohn and drummer Jimmy Bain to form The Wick Scottish Dance Band. In 1953 the band reorganised with Eann Nicholson on accordion, David Smith on piano, Jimmy moving to bass and Chris Duncan on drums. This band did many broadcasts but eventually, due to the cost of travel, it was reduced to a trio with Addie Snr on fiddle, banjo and Hawaiian guitar, wife Isobel on keyboard and Addie Jnr on accordion.