Although living in Biggar for some years now, Callum was born in Edinburgh and raised in the Midlothian village of Lasswade and then Loanhead where he resided for many years. Parents Charles and Helen enjoyed music but were not musicians, however grandfather William Williamson, a gamekeeper who latterly stayed at Stichhill near Kelso played the fiddle in his younger days. Unfortunately he was unable to play in latter years due to deafness as a result of his service in the First World War. Callum’s Christian name comes from his maternal grandmother who was a McCallum from Argyllshire, so perhaps there was also a musical influence there.

At the age of ten, Callum started piano lessons with local teacher Miss Jean Monteith in Loanhead. He spent four years under her tuition and did become proficient in the theory of music, which was to stand him in good stead in years to come. The Scottish influence possibly developed in the early nineteen fifties when he visited his grandfather, referred to above, and they would listen to the various Scottish Dance Music programmes on the old accumulator radio, Jimmy Shand and his Band being one of the favourite bands amongst others.  At fourteen Callum decided to move over to the piano accordion so he bought himself a second hand 120 bass Frontilini. Getting tuition though was more of a problem. The best local teacher, without doubt, was the renowned Chrissie Letham who taught in a studio below Gordon Simpson’s music shop in Stafford Street, Edinburgh but she had a sizeable waiting list so it was with nearby Bilston teacher Harry Dougan the accordion lessons began. Harry was elderly but had played both accordion and dulcimer in dance bands for most of his life and as we all know there’s no substitute for experience. His job was made easier by the fact that Callum already knew about the right hand and they were able to concentrate on bass technique.

Callum also reminded me that in the 1970’s Chrissie Letham ran an ‘accordion club’ in Edinburgh which he enjoyed attending, firstly in the English Speaking Union in Athole Cresent  and then in the Rifle Masonic Lodge in Broughton Street before latterly moving to  premises in Gorgie Road before finally settling briefly in Abbeyhill.

Anyway back to the story, in the late sixties/early seventies Callum met in with Penicuik fiddler Alex Baptie, a good player who was competing at various competitions and whose composition “Echoes of Perth City Hall” won the Own Composition section at the Perth Festival around 1975. Alex was a great devotee of pipe music and Skinner tunes and Callum’s repertoire increased considerably.

Callum and Alex started to do “wee jobs” which helped Callum to gain experience in front of an audience. At this stage these were more in the nature of a spot in a concert programme rather than playing for dancing, for example with the Penicuik Male Voice Choir.They were also augmented by Bob McMath on second accordion and if a drummer was required a young lad just starting on the scene was Penicuik’s Max Ketchin and they sometimes shared the platform with Max’s dad Davy, who was just retiring from the pipe band competition scene to start on a long and successful career as a solo piper playing for entertainment, not trophies. Further experience was gained by sitting in on second box at the weekly Atholl Country Dance Club which met initially in The Assembly Rooms in Leith, then later in the Churchill Theatre, Edinburgh and now in Inverleith Church Hall. Anyone was, and still is, welcome to bring along an instrument and sit in and the band, then as now, is fronted by accordionist Iain MacPhail. It was through the ‘Atholl’ that Callum met many other musicians who were to play a part in his future musical career, for example, Shetland fiddler Alan Gifford who worked at that time in Edinburgh. Callum also recalls one of his earliest introductions to playing for Scottish Country Dancing when he was asked by the late Willie Stoddart to deputise for him by playing for the Juniper Green and Clermiston Dancers led by Captain Bain, which also involved a trip to Saverne in France in 1972 for a Folk Dance Festival.

In the early 70’s Bobby Jack, Gordon Young and Robin Brock started an Accordion Club at the ‘Alan Ramsay’ at Carlops near Penicuik. As with all early Clubs this was an inspiration to all local enthusiasts, players, listeners and dancers alike, who could not only hear their idols but also see them performing on stage, listen to their anecdotes and meet them in person. Will Starr, Jimmy Blue, Jim Johnstone, Iain MacPhail, David Cunningham Snr, Ian Holmes, Bert Shorthouse, Bobby Crowe, Tommy Ford, Jack Delaney, a young Jimmy Cassidy and fiddler Bobby Christie are some of the names that Callum remembers from this venue.

From the Frontilini mentioned above Callum had moved on to a black Atlantic IV, then in 1972 he bought a Morino IV from Clinkscales of Melrose for £340 (happy days!) which he still uses today for lead box. This was augmented in 1981 by a well used Domino V which he has used mainly for second box work after he had it fully restored by Geoff Holter at Darlington.

In 1975 Callum recalls traveling south with Iain McPhail’s Band to play second box at a Leeds University Country Dance Festival with Max Ketchin on drums, John Strachan on bass and Ena Wilson from Elvanfoot on piano. With his introduction to playing with a dance band Callum gradually started to play for dancing with his own group. Country Dancing and village hall dances were still thriving, so with a combination, as required, of Alan Gifford on fiddle, Arthur Speed (Penicuik) on second box, Margaret Winchester (Penicuik) on piano, Jimmy Ritchie (Penicuik) on bass and Robbie Dickson (Dolphinton) on drums, things got under way. Everything went well, with the band building both repertoire and experience and following the natural sequence of events Callum applied for an audition with BBC Radio Scotland, which took place in December 1976. Early the following month they heard that they had been successful and the band recorded their first studio broadcast for the BBC on 3rd March 1977.

As with every band, personnel changed gradually over the years and Callum has been good enough to list his BBC broadcasts, he also did three for Radio Forth between 1977 and 1981 the first being a programme entitled “Caperceilidh” then two for “The Folks Around Robin” presented by Robin Brock. 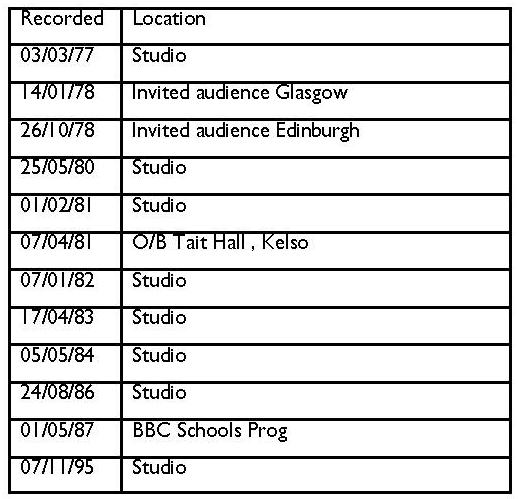 Over the years Callum was fortunate to ‘sit in’ with various established bands and he feels this was invaluable experience as there is nothing like learning on the job - almost like serving an apprenticeship. In this respect he acknowledges band leaders Iain MacPhail, George Meikle, Andrew Stoddart, the late Peter Innes and the late Alex McPhie as well as musical colleague Derek McLeod. 1977 saw one of Callum’s most memorable jobs on second accordion with The Lothian Scottish Dance Band when they were asked to play for the Commonwealth Prime Ministers Conference at Gleneagles Hotel. Afterwards the band members were introduced personally to the then British Prime Minister Jim Callaghan and all of the Heads of State present. The previous year, 1976, Callum had auditioned for the BBC on second box with The Lothian Scottish Dance Band. The band passed with flying colours but they already had a full diary and were looking for a full time band member which didn’t suit Callum, so by the time their first recording came along it was Alan Ross who was carrying out that role although Callum did feature as second accordion on their first LP “Introducing The Lothian Scottish Dance Band”. Further broadcasts as second accordion were to follow when fiddler Alex McPhie formed his own band in the early nineties.

In1982 Callum (Wilson) of Loanhead married Ena (Wilson) of Elvanfoot (of whom more in a later issue of the B&F). When looking for a home they settled on a compromise between those two locations, namely Biggar which was ideally situated for work and band travel. In 1980, and for the next 14 years, Callum, Ena and Alan Gifford were guests at the annual Up Helly Aa Festival in Lerwick, their particular venue being the Islesburgh Community Centre for what is recognized as the marathon playing session in the Scottish Dance Band calendar.

On retiral from that annual event Callum and his band were given the opportunity by Barrhead Travel to be one of the bands providing the music for one of the week’s in an annual two week Scottish Country Dance holiday to various Mediterranean seaside locations. For Callum and the band it kicked off in Malta in 1997 and continued in 1998 (Costa Del Sol), 1999 (the Algarve), 2000 (Costa Blanca), 2001 (Majorca), 2002 and 2003 (Cyprus). By then, having visited all the available venues and particularly after the luggage restrictions which came into being after the 9/11 bombing, the band decided to bow out gracefully.

On concluding this article Callum gives his greatest acknowledgement to his wife Ena for her past and continuing support and encouragement.

Whilst Callum is now retired from his work / business as a Clerk of Works he remains active on the band scene and although dancing and dances in general have decreased in recent years the band still has enough work to “keep their hand in” and while they leave the broadcasting to the “younger players” they continue to enjoy an occasional tune. Long may they continue to do so.