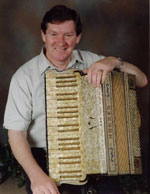 When you ask any musician involved in the Scottish Dance Music circuit “When was your first public performance?” you don’t expect the answer to be “the King’s Theater, Glasgow, in 1962 – playing trombone with an amateur opera company, in a production of Show Boat”. However, this was indeed the answer David Bowen gave when I asked him that question.

David is well known today as a talented box player and is also in great demand as a pianist. However, he was playing trombone and piano long before he ever strapped on an accordion. In fact, he claims he got involved with the accordion “by accident” while he was on holiday on the Isle of Coll. He had been asked to play piano for Bunny Cruickshank from Oban, in a show dance, which was being staged in the local village hall. There was only one slight problem – the piano provided was “way out of tune”. Luckily, Alistair Oliphant – the hotel proprietor – had brought his box along and asked David if he wanted to play instead. David had never tried an accordion before, but being able to play piano, he managed the right hand (keyboard) side with relative ease. This was his first attempt at an accordion – at the age of eighteen. David was brought up in Glasgow, his parents both played piano and his father also sang tenor, performing in various operas and shows in Ireland. Both of David’s sons had piano lessons, but unfortunately never continued.

David taught himself to play the accordion – his first one being a Baille. He now plays an original Hohner Morino IV with free bass – which was actually made in the late 1920’s. He bought this particular accordion in the early 1970’s – and it still produces a fantastic sound. The competition stage was only visited once as a competitor by the young self taught accordionist. It was the West of Scotland Championship, organized by Jock Loch, and was held in Straiton, Ayrshire. David thinks he came in about fourth in the competitions and remembers Ronnie Easton and Brian Griffin were also competing. David remembers playing second box at the evening concert with John Carmichael and Charlie Cowie with a few remarks from the afternoon competitors! In the early years, the music of the Jim MacLeod Band was a favourite of David’s – in fact, he used to play along with the MacLeod records while practising in front of a mirror!

Nowadays, David is frequently involved in various competitions and festivals – in the capacity of adjudicator and tutor. These events include anything from the Mod, to the Festivals held in Keith, Lairg and Stornoway.

David occasionally likes to get away from Scottish dance music and relaxes to some easy listening music, which includes the likes of Johnny Mathis, Barry Manilow and James Last. Brass band music, church music and modern folk styles are also favourites which have had some degree of influence.

Within the Scottish Dance Band circuit, the Jim Johnstone Band is probably David’s favourite band, but there are so many others that he enjoys listening to. These include the late Jimmy Blue, Bobby Crowe and Jimmy Lindsay from days gone by and then right up to date there are bands such as Graeme Mitchell, Colin Dewar, Bill Black and Gordon Shand.

Although David has never had the urge to compose a single tune in his life, he enjoys arranging music for different groups – both Scottish and folk.

The band scene began for the young musician around the time when the Accordion & Fiddle Clubs started. David was a member of the ‘M.A.F.I.A.’ and was in Dumfries on business when he met up with Jimmy Yeaman, who mentioned that there was an A&F Club being held that night at the ‘Hole in the Wa’’. David went along and played piano with Jimmy. The guest that night was Bobby Crowe, who asked David to play at a few gigs with him – that was the start of the band scene and a long friendship.

David moved to Inverness in the early 1970’s and was involved in Construction Equipment Sales. In the past couple of years he has changed direction and is now a professional musician and tutor playing as often as he can as a soloist and with his own and many different bands as well as tutoring five days a week.

David has been involved with such a variety of bands over the years, there are far too many to name. However, here is just a sample to give you an idea :- Bobby Harvey, John Carmichael, Lex Keith, George Stittat, the Kelvin Ceilidh Band (Bob Lillie), Bobby Crowe, Angus Fitchet, Jim Johnstone, Ronnie Easton, Fergie MacDonald, Fraser McGlynn, Jimmy Lindsay, Bill Black, Graeme Mitchell, Ivor Britton, Jock Fraser, Marian Anderson, Iain Anderson, Robert MacLeod, Calum MacLean, Ron Kerr, Tommy Walker, John Ellis, Andrew Knight, John Strachan and Roger Dobson. (Apologies to anyone accidentally omitted). This list has names of bands that David has played with regularly as well as a few where he only played one or two gigs. Irrespective of how many gigs he played with any of them, this is possibly one of the most impressive lists I’ve ever seen!

David first formed a wee group “many years ago” with Stewart Reid on fiddle, Mike Shaw on keyboard and Mike Smith on drums. David and the boys played at quite a few gigs, but apart from this, he feels he never really had his “own band”.

Nowadays, there is still no “steady group”, however he is able to ask people like the great pianist Dennis Morrison and one of Scotland’s top drummers, Billy Thom, to play at gigs and A&F Clubs. In fact these two fantastic musicians are on David’s latest CD Sounds of the Old Morino which was released in the summer of 2003. It’s hard to believe, but this is David’s first ‘solo’ album (and a cracker it is too)!!

Foreign shores have also had the pleasure of hearing the Bowen sound. David has performed in Nigeria, Norway, Bulgaria, Germany and Eire as well as having toured Australia and New Zealand with the Alexander Brothers as part of the Bobby Harvey Band.

Closer to home David has worked as a backing musician with most of Scotland’s top performers. His first radio broadcast was with Tommy Walker  around 1969/70. In these early days, David was broadcasting every year with various bands, from the aforementioned Tommy Walker to Graeme Mitchell or Jock Fraser. David has also broadcast many solo performances for BBC Radio Highland.

And he hasn’t restricted himself to radio broadcasts!! David has been on five STV Hogmanay Shows with the Bobby Harvey Band and numerous other TV programmes with the McCalmans, just to mention a couple.

Away from the ‘live’ performances, there are over thirty albums on which the playing of David Bowen can be heard. Again, just a sample of these include – Bobby Harvey, Stuart Anderson, Graeme Mitchell, Iain Anderson, Bobby Crowe, the Strathpeffer Dance Band, Hector McRae, Bobby Coghill, Tommy Darkie, Davis Silver and Fergie MacDonald – the list is endless (and not a grey hair on his head!).

As well as teaching music, recording CDs and playing gigs with all these wonderful musicians, David still finds time to attend Accordion and Fiddle Clubs – and not just as Guest Artiste. He tries to attend his local clubs of Highland, Dingwall and Forres as often as he possibly can. However, on the subject of A&F Clubs, David feels that most clubs need an injection of players – both young and old. Indeed, as has been said so many times before, the more established players should be encouraging the newer players, playing along with them to build their confidence.

Being a tutor, David has these words for young players who may be new on the scene “Learn the basics first, read music where possible and play tunes within themselves at sensible tempos”. Coming right up to date, apart from the recent CD mentioned earlier, David recorded a ‘Take the Floor’ broadcast  in December 2003, playing second accordion with Bill Black’s Band.

Future plans for David include developing his tuition and expanding the geographical area he covers (he already tutors every two weeks in Stornoway, and has weekly classes in Inverness, Nairn and Forres), to encourage younger players to attend festivals and to get more involved with our A&F Club scene.

One ambition he has, is to have a group of accordions, fiddles, backing musicians, dancers and singers, based in the North and surrounding areas  to tour small villages in the North West of Scotland not served by the A&F Clubs. This would display to other youngsters what music and dance is all about – and what it can do for an individual in their development. A very worthwhile venture indeed.

Music is in the blood of David Bowen – and he will continue to help and encourage all musicians of all levels to fulfill their own ambitions in the furtherance of the Scottish Dance music scene – which is good news for all his fans who can’t wait for the follow-up CD!