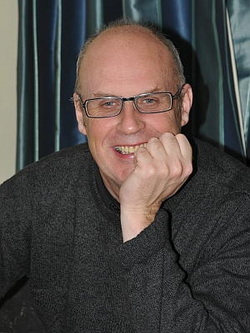 I hope you enjoy your visit to the Box and Fiddle Archive. If you're looking for information on any musical personalities check under Musician Biographies, Roll of Honour (Obituaries) and also NAAFC Awards Archive and within that NAAFC Honours for separate articles written when individuals became our Guests of Honour.

If you wrote an article which I haven't included please e-mail it to Pia and she'll forward it to me to be added.

​Please let me know of any names, dates or details missing from The Roll of Honour.


​
On the morning of May 11, 1857, the telegraph master, Charles Todd, who had left Delhi to check the lines which had been cut by the mutineers was murdered by them. However, his two assistants, William Brendish and J W Pilkington, remained at the office till 2 pm, having received no message from the military which had been relying heavily on help from Meerut. Meanwhile, the signallers had been providing updates to the "Amballah" office of the events in Delhi. At three in the afternoon, Pilkington returned to the office with a military officer from the Flagstaff Tower where the telegraph officials had retreated to dispatch a "very meagre official telegram to Amballah". The last dispatch sent to Ambala said that the telegraph officer who had left from Delhi in the morning had been murdered. It ended with "we are off".


HISTORY of The Highland Society of London
The Highland Society of London is a charity, which exists to promote and support the traditions and culture of the Highlands of Scotland, whilst maintaining a Membership of individuals to support the Society’s activities. The trustees of the Society form the Committee of Management, which meets four times per year to administer the Society’s affairs. The Membership of the Society meets twice per year to discuss the activities of the Society in General Court and to elect the Committee of Management; each General Court is followed by a dinner, and the Society also arranges a cocktail party each May.
The Highland Society of London was originally formed on 28th May 1778, when twenty-five Highland gentlemen met at the Spring Garden Coffee House in London, in order to form a Society that “might prove beneficial to that part of the Kingdom”. The first President was Lt-General Simon Fraser of Lovat and the Society was subsequently incorporated by Act of Parliament in 1816. Since 1965, the Society has been registered as a charity with the Charity Commission of England and Wales, number 244472. Her Majesty The Queen is Chief of the Society and the current President is Duncan Byatt.
For over two hundred years, the Society has been influential in matters relating to the Highlands and Islands of Scotland. In 1782, the Society procured the repeal of the Disarming Act (passed after the Rising of 1745 and which, amongst other things, prohibited the wearing of Highland Dress); and from 1784, secured the restoration of forfeited Highland Estates. The Society was also instrumental in setting up the forerunner of the British Fisheries Society in 1786, leading to the founding of fishing villages at Ullapool, Tobermory and others. In 1815, the Society established the Royal Caledonian Asylum (now Royal Caledonian Schools), to educate needy children of Highland descent living in London. In 1859, the Society took a prominent part in forming the London Scottish Rifle Volunteers; and in 1902, successfully opposed an attempt to abolish the Kilt as the field dress of Highland Regiments. The Society’s subsidiary charity, the Baroness Von Wilczek (née Mackenzie) charity, founded in 1911 to help Scottish Regiment war widows in need and whose funds were finally exhausted in 2014, has now been wound up; its remaining obligations are being met from a separate fund within the Society.
During this time, the Society gathered a large collection of Gaelic manuscripts and other historical artefacts. Many of these manuscripts (including copies of the Poems of Ossian, published in Gaelic by the Society in 1807) are available to view at the National Library of Scotland, in Edinburgh; and the Society’s unique collection of ancient tartans is on view at the National Museum of Scotland, also in Edinburgh. There are other items on display at the Caledonian Club in London and at the The Museum of the Isles at the Clan Donald Centre, at Armadale on Skye.
The current focus of the Society is to support traditions and culture particular to the Highlands and Islands. The Society awards the prestigious Gold Medal for the best player of Piobaireachd at each of the Argyllshire Gathering and the Northern Meeting, annually; and awards prizes at various other Piping competitions. Each year the Society also gives an art prize through the Royal Scottish Academy; Gaelic singing prizes at the Royal National Mod; Highland Dancing prizes at the Glenfinnan Games; and has recently instituted an essay prize with the University of the Highlands and Islands. In addition, the Society makes financial grants to a number of related charities and organisations that promote and support Highland traditions and culture, and Members are encouraged to contact the Committee of Management with suggestions for suitable beneficiaries. The Society is funded through Life Membership fees, income on its investments and charitable donations.
The Rules and Bye-laws of the Society were recently changed to admit ladies as Members. Rule 16 currently states that: “Persons qualified for being proposed Members are natives of the Highlands of Scotland, Descendants or Spouses of Highlanders, Proprietors of Land in the Highlands, Individuals who have done signal service to that part of The Kingdom, or Officers serving or who have served in Highland Corps.” Candidates for Membership must be proposed and seconded by two existing Members (neither of whom is the candidate’s parent) for approval by the Membership at a General Court. There is a Life Membership fee due on joining (currently £250), but no annual subscription; although Members wishing to make ongoing donations can do so via the Society’s Justgiving site.
The Society’s regular activities in London include the General Court and Annual Dinner in March, celebrating General Sir Ralph Abercromby and all Scotsmen who have fallen in defence of their country, with the focus of the evening on the piping of the Society’s Honorary Piper; the Spring Cocktail Party in May, generally held in conjunction with members of the Northern Meeting and the Argyllshire Gathering; and a second General Court and Dinner in either November or December, followed by a selection of Highland music and entertainment. Members are encouraged to attend these events, and to bring guests. The Highland Ball takes place at the beginning of March each year, under the auspices of the Highland Society of London.