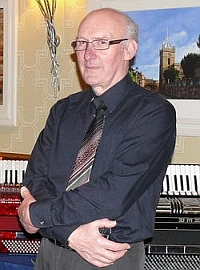 John was born into a musical family, living at Deanston Farm, Lochfoot near Dumfries. Dad was a fiddle and melodeon player while Mum played the piano. John was in his twenties when local accordionist Graham Barbour had need of a second box player, so John acquired a Hohner Verdi and reading chords written out by Graham, learned in what would be termed in today’s jargon by ‘on the job training’ eventually branching out with his own band when Graham got married. His more familiar daytime role as accordion salesman came about purely by chance in 1972. John was visiting Jimmy Clinkscale’s Melrose premises when Jimmy mentioned a vacancy for a manager for the music shop they had just acquired in Dumfries. In due course John got the job, and in 1983 John set up his own business in a small shop in Munches Street, later moving to larger premises in Great King Street - where you’ll still find "John Douglas Music" today.