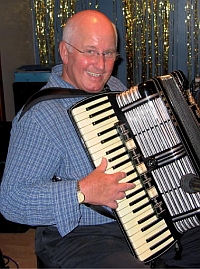 Born in Duns, Berwickshire in 1945 Derek’s family moved to Galston in Ayrshire, when he was four years of age. Inspired by listening to radio broadcasts of Scottish Dance Music he obtained his first  accordion at the age of 8 and his excellent ear was to prove more useful than formal tuition, as, over the years he mastered the accordion, guitar, organ, keyboard and drums.  He also developed an interest in recording, which was to lead to a second part-time career when he took over the technical side of George Fleming's recording studio in Crosshouse, Ayrshire. From this the Ayrespin label was born and in 1992 Derek created the Bryansroom  recording label which is still going strong today. His involvement with Accordion & Fiddle Clubs started in 1969 with the formation of the Galston Club. He was a regular contributor in the early years of Box and Fiddle magazine, and after the death of Will Starr it was Derek who suggested to the NAAFC that the leading lights of the scene be honoured during their lifetimes, not after. Derek continues his regular involvement as resident pianist at the Mauchline Club. A real all-round musician, recording producer and entertainer.