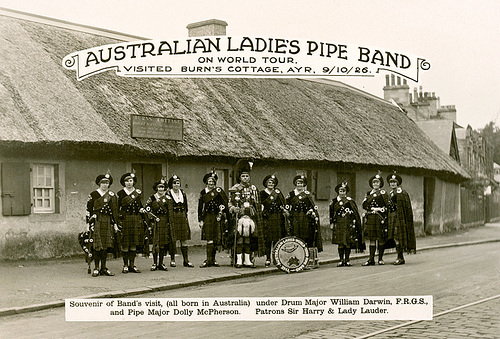 This photograph was taken in Scotland in 1926 during the first and only world tour of the Melbourne-based Australian Ladies [Scottish] Pipe Band, which was founded at the end of World War I to raise money for returned soldiers and charities. Several attempts were made to stop the tour by those who questioned its moral and financial rectitude.
The tour was first mooted by bandleader Drum Major William Darwin - songwriter, adventurer and inveterate promoter. Darwin envisaged performances by the ladies at major pipe events throughout the English-speaking world, an audience with Their Majesties King George and Queen Mary and a visit to the battlefields of France, where his protégés would pay their respects to fallen friends and relatives.
After a year of intensive fundraising and lobbying 16 ladies - under the watchful eye of Drum Major Darwin and Pipe Major Dolly McPherson - arrived in New Zealand on the first major leg of their world tour. There, in December 1925, the ladies were denied passports for Canada unless they were able to provide evidence of parental permission for the under-age members of the band. Band members were also asked to pay a 50 pound per person repatriation bond as surety in the event that the tour proved financially unviable. Seven ladies, four of them minors, were obliged to return to Australia.
Two months later, determined to fulfil their engagements, the remaining band members set sail for England. August 1926 saw the Australian Ladies' Pipe Band in Scotland where they scooped the Angus Murray Cup and a sizeable number of gold and silver medals. One month later, at the Braemar Highland Gathering, they became the first ladies band to play before the King and Queen:
A novelty this year was the inclusion in the parade of the Australian Ladies Pipe Band by special command, and well indeed did they deserve the cheers that greeted their appearance, so many thousands of miles away from their homes..
Wherever they performed the ladies sold souvenir buttons, postcards and concert programs to cover costs and promote the tour. A souvenir program printed in Britain shortly after Braemar claims a number of world firsts for the band, including 'first Pipe Band to be broadcast by wireless to all parts of the World from Melbourne, Sydney, New Zealand and Braemar'.
The Australian Ladies' Pipe Band arrived back in Melbourne on the 'Orsova' on 18 January 1927 and were soon after engaged by ABC radio station 3LO to take top billing for one week.
A set of silver and ivory pipes bought in Glasgow by one of the ladies is now owned by Australian piper Ross Campbell. Pipe bands have been popular in Australia since the 1800s."