Ron Kerr and his Fiddle
By Tom Clark 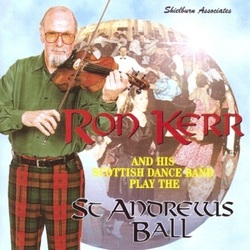 There are many fine fiddle players in Scotland today, covering a wide range of ages. Out of all of these Ron Kerr must be the busiest, being heard regularly on the air in many fine bands with his own distinctive style instantly recognisable.

My own knowledge of Ron goes back a long way – he was still at school when we first started playing at dances. I was delighted when Ron agreed to be the subject of a B&F feature and we had a lengthy discussion at his home in Monifieth.

“I was eight years old when I started violin lessons – or should I say fiddle lessons. My first tutor was Mr Morrison Reid of the Dundee School of Music. My brother, Cameron, had been to piano lessons for about 4 years by this time and we both found an interest in Scottish music through the influence of my grandfather, who was a very keen Scottish music fan. This was in the early fifties when entertainment had to be made at home (no television) and many a grand night we had round the piano in our Dundee home,

In those days we were members of the Boys Brigade and with a few boys we met there we formed a band. We played at Scottish Country Dances in the High Kirk, St Paul’s Church, East House Maryfield and many others. We also did broadcasts on Children’s Hour on B.B.C. radio.

When I was 10 I passed an audition for solo fiddle for Children’s Hour and played on many programmes. Concluding my association with the children’s programmes, I was invited to do a spot on national B.B.C.T.V. in a programme “All Your Own” , from Limegrove Studios in London. The person who interviewed me was the late Huw Weldon. The Musical Director was Steve Race and Cliff Mitchelmore was the Producer.

This was a very exciting and busy time on the Scottish music scene and it was about this time that my brother, Cameron, and myself formed the Cameron Kerr Scottish Dance Band with Tom Clark on lead accordion.

The years that followed saw us playing at engagements throughout the country and doing many broadcasts n B.B.C. radio’s Scottish Dance Music. During this time I passed an audition for B.B.C. radio Solo Fiddle programmes and I enjoyed very much playing for Scotch Corner programmes.

In the mid-sixties, the music scene in Scotland changed a bit. Scottish music seemed to lose a little of its appeal, temporarily, and I formed the Cameron Kerr Trio. The work available for Scottish Dance Bands tailed off for a while and the band went “off the road”. Due to work commitments, Tom Clark left the band and Bobby Crowe took over as lead accordion and did our broadcasts for many years.

My main interest became the work with the trio, where I played fiddle, accordion and double bass – though not all at the same time I hasten to add! We played many residences throughout Tayside and although it was mainly modern and pop music we were playing, we always featured a fiddle cabaret spot for two half hour sessions each night and I found to my surprise that this proved tremendously popular.

I always remember one particular number at this time called “Jig-a-Jig” by East of Eden, which proved to be very helpful to me and the success of the trio. Young people seemed to want more of the Scottish Fiddle, even though they had come to hear something else.

In the 70’s the Scottish music scene seemed to get started on a revival and I found myself doing a lot of session work on radio, T.V. recording and even a film for M.G.M. The bands I worked with in those days were Jimmy Blue, Rob Gordon, Jim Johnstone, Andrew Rankine and Lindsay Ross. Whe Ian Powrie left for Australia in 1966, Jimmy Blue asked me to join him. It was with Jimmy that I was involved in the M.G.M. film. The music was recorded at Shepperton Studios in London and the cast included Peter O’Toole and Susanna York. With Jimmy I also did many T.V. programmes, radio broadcasts and L.P.s. My playing experience with the Rob Gordon Band was also a very enjoyable time. I particularly liked Rob’s grasp of the old-time dance scene. I also did a few L.P.s with Rob.

In the early 80’s I decided to have a rest from the semi-professional playing for a couple of years. During this “rest period”, I decided to go back to study and had classical tuition from Mr Morrison A.R.C.M. of Broughty Ferry. I was practicing two hours a day and I think that this led to a re-discovery of the importance of bowing technique. I’m sure this period of work led to an improvement for me, and I felt a real benefit from the tuition. Perhaps, it’s a great idea that busy players should take some off to revise their technique – it can be enjoyable and rewarding.

My interest in the band scene was rekindled when I got an offer from Iain MacPhail to do some work with his band including T.V., radio and records. The MacPhail band work makes heavy demands on the ability and technique of a fiddle player, and I found the experience very enjoyable and a new interest. This was me back on the band scene again, and with a greater interest than ever.

Another band I have recently become involved with is the Simon Howie Band. I thoroughly enjoy adding my experience to this fine young band.

And what of the future? I think I would like to do a solo fiddle recording. This is something I haven’t as yet got around to going.

On reflection, I often look at my fiddle and say “Thank’s pal”. It has taken me from Truro in the South to Wick in the North, Aultbea in the West to London, Ireland and all over Shetland. Village Halls to ballrooms, pubs and clubs, studios of radio and television, as well as film studios. It has also taken me to castles and mansions, but most of all my fiddle has made me real and lasting friendships.”

Well then, Ron as you can see is certainly in demand. His undoubted success with different bands he plays with, is due I think, to his ability to listen to what is going on around him, and being able to adapt to different sounds without losing his own identity. I, for one, sincerely hope that it won’t be too long before that solo L.P. is under his belt. It couldn’t be anything other than a success.

Ron’s wife Elizabeth, is the sister of Norma Gray, former double bass player with the Cameron Kerr band in the sixties. They live with their family at their home in Fairways, Monifieth.