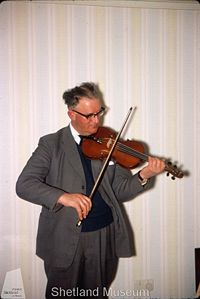 The death of Dr. Tom Anderson MBE, on 20th September 1991 in Montfield Hospital, Lerwick, at the age of 81 visited a sadness upon the Shetland community which was shared by many people throughout the world. His passing marks the end of a most remarkable chapter in the history of traditional music in Scotland, and Shetland in particular as he single-handedly set out to preserve and then to develop Shetland’s traditional tunes and fiddle playing style in the dreich apathy of post-war economic and cultural depression.

‘Tammy’, as he was universally known, was born into a musical family in the Eshaness district of the north mainland of Shetland, learning traditional fiddle playing from his grandfather and more practical skills from his fisherman father.

On his first visit to Lerwick at the age of thirteen, he was fascinated to encounter a fiddler playing in the street – Geordie Stark, the blind fiddler from Dundee, a regular visitor to the islands until the mid-fifties, who was to become one of Tammy’s many friends as well as an early influence on his playing.

As a teenager, Tammy played in the Eshaness Band at local dances and important social occasions before moving to Leewick, in 1938, to work for the Pearl Assurance Co.

Two years previously he had met and formed an occasional musical partnership with another musical legend, (Peerie) Willie Johnston and the duo, which started off entertaining at village halls in rural Shetland, were eventually to delight audiences throughout Europe and North America.

However, Tammy’s playing was by no means restricted to traditional music, sharing the front line with the saxophones of ‘Boosey Leask’ and Bobby Garriock, backed by Davie Gilbertson (drums), Billy Kay (piano) and Peerie Willie (guitar) in a black tie outfit that played for ballroom dancing in Lerwick’s Town Hall before the war.

Tammy and Willie’s partnership was interrupted by the war for, although joining the R.A.F. together, Tammy’s service took him to India whilst Willie’s overseas posting took him right back home to Shetland.

In 1960 Tammy was invited to form and rehearse a group of fiddlers to welcome home a large party of Shetland exiles returning for a ‘Hamefarin’ – the ‘Forty Fiddlers’, later the Shetland Fiddlers’ Society which Tammy was to lead for the next twenty years, appeared at concerts and public occasions all over the Islands, playing to the Queen on at least two occasions.

Tammy, also found the time to help out the Lerwick Brass Band, struggling to reform and short of players in the mid-fifties, by playing bass, and also played violin with the Lerwick Orchestra.

How fortunate, then, that a man of such eclectic musical taste should choose to devote his talent and drive to Shetland traditional music and to see that its rich heritage should revive and develop through broadening its appeal to young people.

Tammy’s wife, Babs, had died in 1969 and her passing clearly marked a crossroads in his life – shortly afterwards Tammy retired early from his job as an Insurance Agent to devote himself to teaching traditional fiddle. His Saturday morning classes in Islesburgh House were extended to weekdays in schools throughout the Islands and over the years children and young people have come in their many hundreds to listen and learn. Tammy seemed to find time for them all and those with little apparent ability or talent seemed to be as welcome as the prodigies – it was enough for Tammy that they were interested and enthusiastic.

In the 1970’s, Tammy was invited by Stirling University to teach at its inaugural Heritage of Scotland Summer School, and such was the success of this venture, that students now travel from all over the world to learn what had become a dying art. Many of them traveled on up to Shetland to further their studies and, before very long, Shetland became a place of pilgrimage for young fiddle players and Tammy became a kind of cult figure, although he himself would have scoffed at such a notion – one young North American devotee came to visit and stayed two years.

In 1977, the University awarded him an Honorary Doctorate in recognition of his unique contribution to our musical heritage and he was further honoured by H.M. the Queen with the M.B.E. the same year.

I don’t know if Tammy knew how many pupils he taught over the years but they represent a sizeable musical population and span a wide range of musical tastes.

Aly Bain, an early pupil and close friend, was encouraged to develop his own style and successfully took it to the international concert platform and T.V. studio.

Another, Trevor Hunter, developed an entirely different style and assumed Tammy’s mantle as Leader of the Shetland Fiddlers when Tammy, in 1981, decided to concentrate on a group of his younger pupils who were to become Shetland’s Young Heritage and who continue to delight audiences at home and away with their distinctive and well-disciplined playing.

Tammy’s commanding personality and exacting standards, coupled with enthusiasm for the music, communicated itself to those young musicians inspiring them to create their unique sound.

Off-stage, they held a deep affection for him and Tammy’s house became a favourite gathering place for them ; many of them are now accomplished players and teachers with families of their own. As I write this, I learn that one of them, Catriona MacDonald, has won a national traditional fiddle-playing contest.

In the late 1940’s, inspired and encouraged by the English folklorist, the late Pat Shuldham-Shaw, Tammy set about collecting and preserving Shetland’s older tunes and melodies which were in danger of dying out as popular radio began to influence the Islanders’ musical tastes. His work as an Insurance Agent afforded him a unique opportunity to record the playing of the older fiddlers as well as the folk tales of the district and so he collected a wealth of material which would have otherwise have been lost.

Tammy’s archives, however, will be preserved – his friend and colleague, Edward Thomason, Convenor of Shetland Islands Council and former fiddle player with the Shetland Fiddlers, has seen to that with the setting up of the Shetland Musical Heritage Trust, endowed with sufficient funds to see the collection properly preserved.

As if all this were not enough, Tammy also found time to compose over five hundred tunes, many of which have become ‘standards’ wherever traditional music is played. This also seems to inspire other Shetland musicians to compose and, before long, Ronnie Cooper, Frank and Ronnie Jamieson, Willie Hunter, Ian Burns and so on became household names among Scottish music enthusiasts and it seemed no programme of Scottish Dance music was complete without at least one modern Shetland composition.

And so they came, in large numbers, from all the gait ends in Shetland and beyond to St. Columba’s Church in Lerwick to pay their last respects in great voice and harmony. Shetland’s Young Heritage were there, together with the ever-faithful Violet Tulloch and May Gear, and played Tammy’s air, ‘The Slokkit Light’, surely the most poignant of the many tributes paid to Tammy.

‘Slokkit’ in the Shetland dialect means extinguished – Shetland’s grand old man of music had passed on, but his light id far from slokkit.