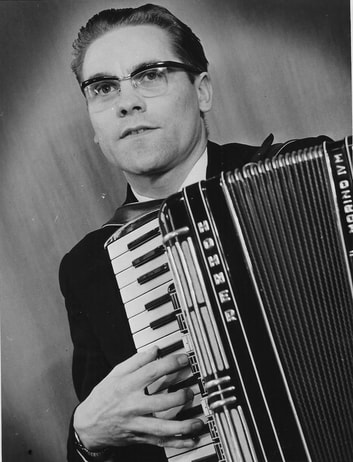 Ian Anderson was one of the UK’s foremost accordionists. His command of the instrument and his hugely varied taste in music meant that he enjoyed a career which spanned over 60 years.  Ian was playing gigs until 2018, and his renowned accuracy, good tempos and jaunty style were still to the fore after all this time. He had a life long affinity with French musette and Continental music, he loved everything about the accordion, but these genres were where his real passion lay.

​Born in 1939 in the village of Birnam by Dunkeld, he attended the Royal School of Dunkeld, and went on to serve his apprenticeship as an upholsterer and carpet fitter with J.D. Cameron, then Thomas Love & Sons of Perth.

Music was always Ian’s first love, and he took very little persuasion to turn professional when the opportunity presented itself. He was taught music by the famous Perth empresario Bill Wilkie from the age of 12, then he himself began teaching when he turned 17 years old. Ian taught at the Wilkie School of Music for 62 years, which brought him into contact with literally hundreds of students including Peter Bruce (Scone), Robert Black (Stanley), Simon Howie (Dunning) and many more. His knowledge of music theory and the structure behind the tunes were always elements that Ian drove home to his pupils. It wasn’t enough to simply turn up and recite the tunes, he required the instrument to be played properly, and the music to be respected in every way. He was not a man who would sit quiet in a music lesson. Pupils knew exactly what he thought of their efforts, good or bad, and it was often commented upon that such a jovial and mild-mannered man could be as animated as he was when standards were lowered.

Ian met Johanna in 1968, when she was one of his accordion pupils, and they married in 1970. Children soon followed, and Iain, Calum, Joanne and Gemma were the lights of his life, along with his 5 grandchildren.  Johanna smiles when she recalls that her efforts on the accordion were rewarded by the news that Ian had swapped her instrument for a sewing machine. Maybe he knew the recipe for a perfect marriage as they were married for 48 happy years!

After a two-year stint in national service from 1959, he began playing in various local dance bands around Perthshire. He formed his first trio with local musicians Joan Blue and Billy Colburn which proved to be a big success. This led to decades of gigs, with a range of local musicians, in dance halls, clubs, hotel ballrooms and recording studios.  Ian embraced the new age of electronics which allowed him the scope to work as a solo artist as well as an ensemble. He would be one of the busiest musicians in the country with a huge variety of engagements ranging from young farmers dances to weddings and old thyme dances.

Ian played on several recordings over the years, including the famous Bill Wilkie Orchestra vinyl The Music of Forty Hands. During the numerous concerts that Bill organised there was always a slot for Ian to be showcased as one of the star musicians. Further LPs with Alan Kindness and the Glendaruel Band then Jimmy Lindsay’s Scottish Dance Band were recorded in the 1970’s.

Laterally, Ian produced two CD recordings of himself playing solo, which showcased his varied repertoire and legendary technique. No mean feat for a man in his 8th decade.

Ian died peacefully at Cornhill Hospice on 27th November 2018. His family were at his side. He was one of life’s givers, not a taker, he worked hard and paid attention to every detail. Nothing was too much trouble. He has left a legacy with his immediate family, as well as the huge community of accordionists who owe a debt to him for his helpful and professional style, as well as the dedication he gave toward improving their musicianship. 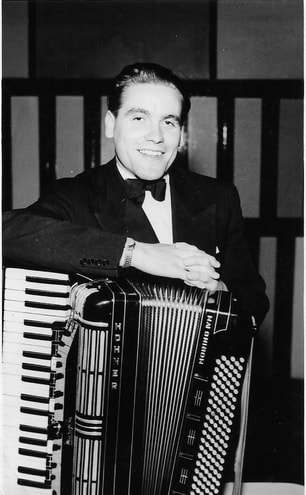