Ian Muir is one of the most accomplished and versatile accordionists in the Scottish music scene today. His musical career has taken him all over the world performing in a variety of different genres.

Ian started playing the accordion at the age of eight, after his grandpa bought him his first wee accordion – a 32 bass Royal Standard. He took lessons with Jim Hutcheon for eight years, during which time he completed the British College of Accordionists Exams to the final grade.

Denny Willis, Johnnie Mack, Russel Lane and Ian Muir in the 1983 Gaiety Whirl
Ian’s professional playing career started at the age of fourteen, when he was drafted in to replace Walter Perrie at The Gaiety Theatre, Ayr. This was the start of his successful career in the music industry. The list of those Ian has appeared with is like a ‘who’s who’ of the Scottish Variety Theatre. Ian has performed with Kenneth McKellar, Andy Stewart, Jimmy Tarbuck, Brenda Cochrane, Peter Morrison, Johnnie Beattie, Jack Milroy, Alastair McDonald and Dean Park to name but a few. Ian toured with Kenneth McKellar and Peter Morrison and did eight summer seasons at The Gaiety Theatre with Johnnie Beattie. He has also performed in the ‘Pride of the Clyde’ show at the Kings Theatre, Glasgow and, would you believe it, a couple of pantomimes at the Gaiety Theatre! A man of many talents!

At the tender age of sixteen, Ian took a step into the world of pop stardom when he appeared at The New London Theatre with Lulu. He toured the Middle East in the mid-eighties with The Barron Knights and also The Dooleys!

In 1979, Ian took to the sky on the inaugural flight of British Caledonian Airways to Atlanta in Houston, Texas. He recalls this was in the day when musical instruments were allowed freely into the aircraft cabin. Also on that flight was the then British Caledonian Airways Pipe Band, which was later to become the Grade One Scottish Power Pipe Band. Ian and some of the pipe band members had a ceilidh on board, marching up and down the aircraft aisle with the accordion and bagpipes, entertaining the passengers on board.

In 1996 Ian entered the world of musical theatre when he was invited to play the part of ‘Le Accordeoniste’ in the musical play, PIAF, the life story of the legendary French singer Edith Piaf. The tour took in all major theatres in Scotland and finished its run in London.

Staying with the musical theatre theme, Ian was involved in the instigation of Dean Park’s Scottish Chart hit ‘Wee Andy Webber’s Scottish Melody’ – a hilarious spoof of Andrew Lloyd-Webbers songs sung in traditional style with Ian accompanying on accordion. This medley captivated many people across Britain, including Lorraine Kelly, who  arranged for Ian and Dean to appear on her show GMTV to perform the medley. Ian’s other television credits include Thingummyjig, Shindig, Grampian’s Welcome to the Ceilidh (hosted by Johnnie Beattie), Northern Nights (hosted by John Carmichael) and more recently GMTV’s live Hogmanay Show from the shores of Loch Lomond.

Ian Muir and Kenny Thomson
It was this same year that he made his band broadcasting debut, appearing on BBC Radio Scotland’s ‘Take the Floor’ programme and Radio Forth’s ‘Folk around Robin’ programme.

He formed his own band in 1984 and has broadcast on numerous occasions for the BBC, including two live recordings for ‘Take the Floor’ and one recording for BBC Radio 2’s Music Live broadcast from Ayr in 1991. Ian and the band have made numerous album recordings, so many that Ian has lost count! 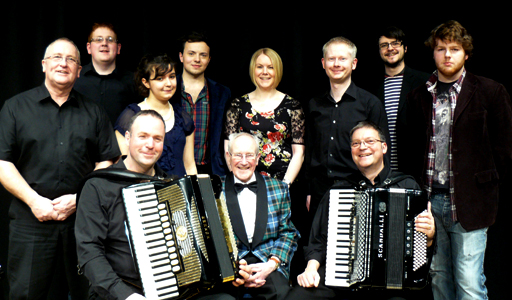 The band was awarded ‘The Scottish Dance Band of the Year’ title at the MG ALBA Scots Trad Music Awards 2010. Since its formation the band has become popular for ceilidh and Scottish Country dancing and has performed all over the world. Highlights include numerous cruises playing on ships such as the QE2 and QM2. Every year the band goes on a Scottish Country Dancing trip and over the years has played for dancers in Cyprus, Portugal, Majorca, Austria, Spain, Madeira, Malta and Italy plus many other destinations.

As well as the performance aspect of music, Ian has forged out a successful career in teaching the accordion. Ian started teaching privately in 1983 and has produced numerous young, talented accordion players including a few Scottish Champions such as Scott Gordon, Liam Stewart and Susan MacFadyen – an achievement he is very proud of. In 1996 he was appointed as the accordion tutor on the BA Scottish Music Course at the R.S.A.M.D., a post that he still holds. Since starting at the Academy he has been appointed as senior Accordion Tutor, Senior Lecturer and has been Acting Head of Department twice. Recently he has been involved with the progress team for curriculum reform and re-validation of the BA Scottish Music Course. Ian also taught at the Stirling Summer School for several years, which is in fact where he met his wife.

Due to Ian’s expertise on the accordion he has been in demand as an adjudicator at such Festivals as the Highlands and Islands Music and Dance Festival, the N.A.A.F.C. Festival and later this year at the All Scotland Accordion Championships held in Perth.

Ian started composing tunes when he was playing with the Wardlaw SDB in the late 70’s and some of these tunes have become standards in the band scene today. Two such tunes are ‘Dunaskin Glen’ and ‘Mr and Mrs McShane of Houston’, both tunes being recorded and broadcast on numerous occasions by other leading Scottish Dance Bands. Last year, in 2010, Ian was persuaded to release a book of his own compositions, a must in the library of any accordionist or fiddler. 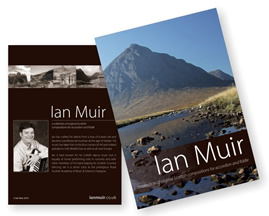 One of Ian’s earliest non-Scottish musical influences was Jack Emblow; he was mesmerised by his musicality and accompaniment technique. Ian recalls listening to ‘Sing Something Simple’ on BBC Radio 2 featuring Jack Emblow.

In Scottish music circles Ian’s influences in the early years were Iain MacPhail and Jim Johnstone. In fact, Ian’s first tape was of the Iain MacPhail SDB. In latter years influences have come from Robert and Duncan Black as well as Gordon Pattullo. During the eighties and nineties piano players such as Peggy O’Keefe and Colin Bell had a great influence on him, especially in their accompaniment technique.

Ian has managed to forge out a very successful and varied musical career spanning more than three decades. His philosophy has always been that the more you can do the more you get to do and this is the way he encourages all his students to think, especially if they are planning a full time career in the music business. With so many musical credentials to his name it is only fitting that he is being honoured by the N.A.A.F.C. in 2011.