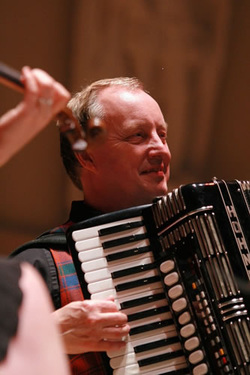 Sixteen years ago the band was going to play for the mid-Sussex Caledonian Society Dance in Haywards Heath. That Friday Frank took his van with his Domino Morino accordion and amplification to his work in London – where the whole lot was nicked. He knew that Bernard Dixon had sold Andrew Rankine a Morino VN and so he gave the latter a ring in Leicester. Frank asked Andrew what he thought was the worst possible thing that could happen to a box player? After a short pause for thought, he replied “that someone should die and leave him a hundred ……… …….. records!”

To shorten the story, Frank borrowed back his old Paolo Soprani from Bernard Dixon  and the amplification from Michael Shaw, who I understand now lives in Strathpeffer and has a lot to do with the Dingwall Accordion and Fiddle Club. So, when I arrived at Haywards Heath that evening I was told of affairs by the M.C. Bruce Urquhart. After introductions I said I had a box in the boot of my car. I could see that Frank was not impressed, but he politely asked what it was. I said a Hohner VM knowing full well knowing it was the same as Frank’s stolen box. His face lit up, but being Frank he asked if it had “Power Bass” – it hadn’t. I think he used it for about a month when miraculously all his gear was found and with it the Morino unharmed. That was how I met him.

Frank was born in Glasgow 40 years ago, but after 10 months, his father’s job took him south to Staffordshire then the London area. His parents are both from Glasgow and started the Scottish Country Dancing when their sons took an interest in Highland dancing. Frank was 10 at that time and learning piano which he took to Grade 8. He started playing the box, a Galleazo and progressed via the aforementioned Paolo Soprani and Hohner Domino to Elkavox which he plays now.

At the start he was helped by Graham Catell at the London Highland Club which used to meet at Fetter Lane and later moved to St Columba’s, Pont Street. At first he played in Flora Argent’s band and it was here he met Ken Slaven who was to become the fiddler in his own band until he moved north to Aberdeen. They started by playing for the Highlands and Islands Society on a weekly basis at Fetter Lane.

The band expanded to take in Bobby and David his brothers, on drums and double bass and slightly later his sister Anne joined to play piano. The youth of the band is emphasised by knowing that Anne made her first recording with the band aged 14 and she played for many years. There has always been a strong family flavour to the band although Bobby is the only one with him on a regular basis at present.

Frank is a chartered accountant working as a financial director to a computer company. Bobby is an electrician and Anne is now married. Ray Milbourne (original Secretary of the N.A.A.F.C) took her place and he has played with some well know folk, among whom one would number Andrew Rankine, Iain MacPhail and Jimmy Lindsay.

Ken Slaven was followed by Ian Mills, from Northumberland. Alasdair Fraser and his brother Ian, Terry Crumbliss from America who was a professional flute player and Highland dancer and he now has Sheena Reid (no relation) who play second box on Frank’s old Domino Morino. She learned her Scottish Country Dance music as Frank had before her, listening to records by Bobby MacLeod, Andrew Rankine, Jimmy Blue and Jim Johnstone. Frank’s wife, Kathy, sometimes turns up with her penny whistle.

The band plays all over the South-East as far west as Cardiff and up to Nottingham. Via, Ian Mills, who comes from those parts, they went up to Newcastleton where they won the Band contest and Frank the Solo Accordion. He told me he met a wide range of people, Albie Tedham, Roger Dobson and his band, John Dagg and his trio, Alan Coulson and many other.

About 50% of their work is R.S.C.D.S. related and Frank has a formidable series of records embracing a number of tracks which have become standards for several popular published dances. The rest is divided between Balls, and what he calls the Barn Dance/Wedding market.

He is too modest to say so, but he can to a certain extent pick his gigs, which because of work and family, he limits to two a week.

There is another dimension to all this, the foreign travel. At the time of writing he is about to set off on a three week tour of Australia and New Zealand, taking with him 150 people wishing to make a tour with Scottish Dancing involved. During the day they see the sights and perhaps in the evening they have a dance or ceilidh. Frank stresses that it is not a school. This is one of the most ambitious trips which have included Hamelin, Denmark, Kilkenny and Canada, whilst he has done regular gigs to Eindhoven, Luxembourg, Jersey and Paris. The organisation behind this is Richard Furlong and his firm of travel agents. You will not be surprised to learn that Richard is Frank’s relief drummer and takes Bobby’s place, particularly on these trips abroad.

What is it that motivated Frank Reid in this desert of Scottish music? As he puts it, most of the people in his office would be hard pressed to describe an accordion. Further, there are no competitions here, so it is very difficult to find the bench marks.

When he was young he would go north to Scotland to help keep up his standards but the inevitable work and family responsibilities have combined to prevent him from going north. It seemed to me that he had a triple drive, he enjoys it, is musically talented, technically competent and last, he runs a very successful musical and commercial operation.

His aim is to spread the popularity of Scottish Country Dancing. He is singularly fitted to do this with his swinging band and I think the proof lies in his phenomenal popularity, evidenced by the constant call on his time and the full halls to which he plays.

A very well known dancer and teacher said to me when he was beginning to tire at the end of a twenty dance programme, Frank Reid could lift him and his fellow dancers and the fatigue would evaporate.

Frank’s small, compact frame exudes a high level of energy which is transmitted through his music and everything he does and to this one can add a remarkable, cheerful and cheering personality.

South of the Border we hope he will lead his band for at least a second twenty five years.