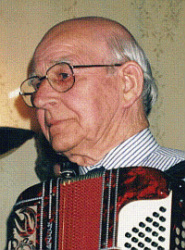 John was born into a musical family in Kinross, Fife. His father was a fine piper and could also play the fiddle and melodeon and his mother played the piano. John initially learned the fiddle before teaching himself the melodeon. When he started an engineering apprenticeship at a garage in Ladybank he was able to buy his first 48 bass piano accordion. John was called up to the REME near the end of the war and in the post war era, whilst stationed in the Black Forest, he added to his knowledge of the mechanics and maintenance of accordions. In the late 50s he bought a Ranco Supervox, a manufacturer he has always held in the highest regard. He also won  the All Scotland Accordion Championship in 1960 and broadcast as part of The East Neuk Band and his own band The Highlandaires. He is known to many musicians throughout the country as the first person to turn to when an accordion needs repair or tuning, having built up a huge amount of experience and expertise in this field over the last 50 years.