On Sunday 28th June accordion and fiddle enthusiasts the length and breadth of Scotland will head to The Huntingtower Hotel in Perth for the National Association’s AGM and prestigious Celebrity Lunch.  One man who has travelled many a mile during his illustrious musical career, entertaining and delighting people wherever he goes, and who will make that same journey to Perth on 28th June along with his beloved wife Betty, is the legendary Scottish accordion player Tom Alexander.

Tom of course is known to many the world over as one half of The Alexander Brothers.  Tom’s contribution to Scottish music in general, and the accordion in particular, throughout a highly successful career spanning fifty years is, by anyone’s standard, too amazing for words.  So often the word “legendary” is used loosely and inappropriately in today’s show business world but, in the case of Tom Alexander, the word perhaps does not do the great man justice, such is the standing and respect he commands throughout the accordion playing world.  It is therefore extremely fitting that the outstanding achievements of one of Scotland’s favourite sons and one of the finest exponents of our beloved instrument should be honoured and recognised by the National Association of Accordion & Fiddle Clubs.

Tom was brought up in the village of Cambusnethan near Wishaw in the county of Lanarkshire.  Music was a staple diet in the family home during Tom’s formative years and often Tom, father Jimmy, brother Jack and sister Betty would sit around the piano as mum Helen led the family in impromptu music sessions.  This of course was in the days before television became a dominant player in most family homes.  There wasn’t the distraction of keeping up with the latest soap, surfing the Internet or watching the next big live televised football match, no this was the days of good home grown family entertainment when you were expected to be an active, rather than passive, participant.

Tom’s father Jimmy, who worked in the local steelworks, was adamant that his family should receive a musical education and so Tom, at the age of nine, acquired his first accordion and started having formal lessons with a succession of local teachers.  After a short period of time his musical progression and competency on the accordion came to the attention of Bill Brown (no relation) who invited Tom to have lessons at his accordion school.  Tom’s dedication, discipline, and commitment on the instrument continued to drive him forward and in 1952 he was entered for the Classical Section of the NAO Championships at the Christian Institute in Glasgow.  At the time Tom had an old Hohner accordion but Bill Brown suggested on the day of the competition Tom used his Frattelli Crosio accordion which he duly did.  Tom went on to win the Championship, playing Bats at Sunset by the American composer Frosini and Spanish Holiday by Eugene Ettore. 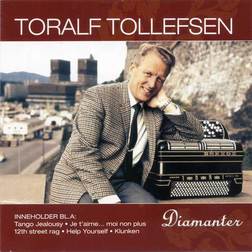 Tom’s first accordion hero was world class concert accordionist Toralf Tollefson (above) from Fredrikstad in Norway.  Toralf, like Tom, came from a musical family and was renowned throughout the world for his technical ability and manual dexterity on the 5-row button accordion.  Toralf died on the 27th November 1994 at the age of eighty.  To this day Tom regrets not learning to play the 5-row accordion, as he feels it would have opened up a wider range of musical possibilities for him.

Tom credits Will Starr and Sir Jimmy Shand as other key musical influences and few would be brave enough to argue with that, as the profile those two great gentlemen gave the instrument is possibly why many of us are playing the accordion today. 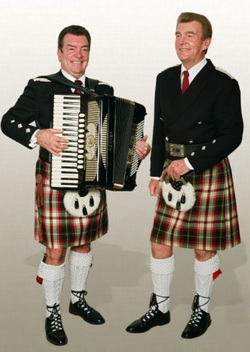 Tom of course has gone on to achieve outstanding musical success both in Scotland and abroad with his brother Jack as the highly successful Alexander Brothers, (above) of whom much has already been written and documented.  However Tom is also musically independent and a class act in his own right – as many of you who have seen him perform at Accordion Clubs will know only too well.  Tom has been making guest appearances at Accordion Clubs for many years now with his musical travels taking him to clubs in such diverse locations as Jersey, Carlisle, Derry, Hexham, Crumlin, Ulster, Drogheda, Thurso, Kirkwall, Biggar, Leyland, Derwentside, Castle Douglas, Lockerbie, Banchory, Kelso and Lesmahagow to name but a few.

Although classically trained, Tom is as much at home playing light classics, continental and Irish music as he is at playing traditional Scottish music as his recent CD releases demonstrate.  In fact, Tom himself would be the first to tell you that he doesn’t regard himself to be on the list of top Scottish players, but I know many who would be willing to challenge that very modest self assessment.

Tom is also a prolific composer, having written a collection of great tunes such as Le Manege, Alpine Expres, The Oil Rigger, Helen Armit, Isle of my Heart, Kenmore Gardens, Bowie's Boat, Pat McCann MD and Kilwaughter House, all of which, have been published by Greyfriars Music, the company Tom jointly owns with brother Jack and long-time musical associate Tom Walsh.

It is clear that Tom’s musical tastes are as diverse and varied as the Accordion Clubs he has visited and, if you dig deeper, you will discover that Tom has a real love for jazz music, which he would love to have been able to play.  You will therefore not be surprised to learn that Tom is also a great admirer of Jack Emblow, who not only specializes in jazz improvisation, but whose contribution to the accordion world across many decades has been exemplary.

Another passion that Tom would like to have made more of during his highly successful life is his love of painting.  As I’m sure you have already detected, I don’t mean painting of the variety that Tom indulged in all those years ago at the start of his working life.  No, I mean the more creative art of oil and water colour painting that Tom has dabbled in from time to time.  What really strikes you when speaking to Tom is that even after half a century of making music there is still a very youthful and enthusiastic creative energy waiting to be released.

Like most entertainers, Tom has also tried his hand at golf and has only recently given up his club membership as I would suspect any spare time he has nowadays is spent pursuing what is ultimately the biggest and greatest love of his life, music!  One gets the sense that Tom is happier now recording another accordion CD, or composing another piece of music, than he is hitting a little white ball around a golf course.

Looking forward, rather than retrospectively on one of the most successful careers in Scottish show business – which he could be forgiven for doing, Tom is as passionate about the accordion today as he was all those years ago when he first strapped on the instrument.  It is this continued hunger, enthusiasm and deep rooted love of music that keeps driving Tom, to not only experiment with different musical arrangements, but also with his extremely youthful outlook on life, to experiment with the latest digital technology.  As I write Tom is just putting the final touches to Airs & Graces, his fifth solo accordion CD, which will be released shortly.  This recording will again contain an eclectic mix of material, which not only underlines how versatile the accordion is, but more importantly, how great the instrument sounds in the hands of a master craftsman such as Tom.

Having played to sell-out audiences in some of the world’s most prestigious venues, as well as numerous television appearances to his credit across a career spanning five decades, Tom still gets a great thrill at being asked to play to highly appreciative audiences at Accordion Clubs, which he strongly sees as the life blood of the instrument.  His experience of playing at Clubs from Jersey to Kirkwall and everywhere in between has allowed Tom to experience first hand the abundance of talented young players that are emerging, ensuring that the future of the accordion is in great hands, literally!

So on Sunday 28th June we gather at The Huntingtower Hotel in Perth, not just to enjoy an excellent lunch and some fine music, but to pay tribute and homage to a man who is without doubt a living legend in the accordion world.  You can be the most talented and gifted player, but it’s what you do with that gift and talent that really matters, and few would argue that Tom Alexander has done more than most with it and is more than worthy of the honour and recognition that the National Association of Accordion & Fiddle Clubs will bestow upon him.  Hopefully on the day, as suggested to him by a member of the audience in the front row at The Webster Theatre, Arbroath in 1958 he will turn back those very successful years and give us a quick blast of the High Level Hornpipe!