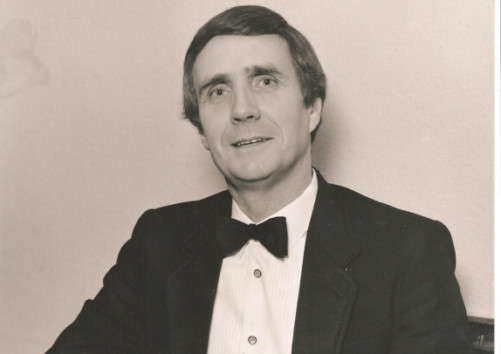 ROGER Crook was born in Forfar and spent his childhood on his parents’ poultry farm in Aberlemno. He was educated at the local primary school and Brechin High School. He started his musical life by having lessons on the violin at the age of six, going to the well known musician and poet Jack D Michie who had a music shop in Brechin. As a teenager he had singing lessons from Ann Nicoll in Forfar.


His voice matured early and he sang the part of the Captain of the Fleet in Brechin High’s production of Dido and Aeneas while in his first year.

Roger led the school orchestra, sang in the Gardner Memorial Church Choir and earned pocket money working for the next farm pulling neeps. A friend who lived on a farm six miles away remembers meeting him for the first time on a Sunday in 1958.

Aged 16, he arrived driving a tractor with a trailer, and, all on its own, lying in the trailer was… a fiddle. He said these were his happiest years.

In 1960 Roger went to study the violin and viola at the Royal Scottish Academy of Music and Drama (RSAMD), but changed over to first study voice with Ena Mitchell.

His college piano teacher said she had never met anyone more musical but unfortunately it stopped at his wrists.


Roger sang principal roles in college operas, and this was how he met Nancy in 1965. He was rehearsing the part of Don Jose in the opera Carmen in a practice room. Needing an accompanist, he looked out in the corridor, just as Nancy, a first year piano student, was walking past. She sight read for him and the rest, as they say, is history.

Nancy and Roger got married in Glasgow in 1968. The three-day honeymoon had to be fitted in between their various summer professional engagements, which included Roger singing opera in Myfod, Wales; Nancy accompanying a choir at the Llangollen and then Middlesbrough festivals and Roger singing in Pitlochry, which he did for 13 Summers as part of Pitlochry Highland Nights.

Much in demand as a tenor soloist in oratorio throughout Scotland and northern England, Roger would often perform alongside three English soloists who claimed that he would make a fortune living down south doing the busier oratorio circuit.

Preferring the security of a regular salary, Roger taught music in schools in Clydebank. He continued to referee football, and became a member of the Glasgow-based John Currie Singers, a professional group that gave many first performances of new works. Roger and Nancy also joined the Gordon Mabbott Singers. Roger auditioned successfully for the BBC and gave many broadcasts with the Scottish Radio Orchestra, the BBC Scottish Symphony Orchestra, the Northern Sinfonia and the Jerusalem Symphony Orchestra.

He travelled to Helensburgh to conduct the Dorian Choir from 1967–72 and the Dumbartonshire Operatic Society 1972–73.

In 1971 son Ross was born and in 1973, just before daughter Lynne was born, the family moved to Fife where Roger had promoted teaching posts in Kirkland 1973–76, during which he conducted the East Fife Ladies Choir; Auchterderran 1976-81, Viewforth 1981-86 during which he conducted Glenrothes Choral 1979-86 and lastly Inverkeithing High School from 1986 till his retirement in 2000.

Roger became heavily involved with Fife and Tayside amateur opera companies, taking leading tenor roles in 14 different operas. He also joined the Fife-based semi-professional vocal quartet Quatrain, who had originally been formed in 1976 to work with the actor John Cairney in Linlithgow for the Lothian Heritage Festival. The group worked all over Scotland and Roger arranged most of their material. They gave many recitals at arts clubs, travelling as far as places like Gatehouse of Fleet and back on the same night. Quatrain made two LPs and appeared on radio. The group retired after 20 years when Rhona Whyte, their soprano, died suddenly at the age of 50.

Roger always had a great love of Scottish dance music and over the years he played in the bands of John Ellis, Jim Johnston and Bert Shorthouse, playing piano, violin or accordion as required. He played piano and did the arrangements for the Fife Strathspey and Reel Society when they won the Golden Fiddle Award in 1981.

Roger made more than 60 arrangements for the Fife Young Fiddlers. He had a band made up of school pupils when he taught at Kirkland High school and later he formed his own Thistle Ceilidh Band which included his son Ross on fiddle then drums, and occasionally filling in on piano, and daughter Lynne (who is carrying on the family music tradition by teaching Cello in Edinburgh).

Ross spent 12 years in the band playing everywhere from Gleneagles to Guernsey, and all the members admired Roger’s ability to teach dances to non-English-speaking tourists as well as his repertoire of witty comments on the microphone such as: “We have had a lot of requests – but we are going to keep playing anyway!”

Roger formed the Doric Trio with Nancy and Ron Gonnella, playing accordion and singing, and they made another LP just before Ron’s death. Roger and Nancy also formed the Rosslyn Duo (named after Ross and Lynne) and made a CD called Songs we Love.

Roger retired from his Inverkeithing teaching post in 2000 and proceeded to carry out much charity work playing in hospitals, hospices and old people’s homes in Fife, Lothians and the Borders. A former school teaching colleague formed Harmony, a charity that, with lottery funding, paid the travel expenses of musicians to put on 60 concerts a month.

In 2012 Harmony was given the Queen’s Golden Jubilee Award for voluntary service by groups in the community bringing life through music. Dunfermline Scottish Country Dance Class have many happy memories of Roger playing at their Monday class and their monthly technique class which was attended by people from many areas.

Roger loved walking his dogs; it kept him very fit. Over the years he had three Alsatians in succession, all rescue dogs, then more recently a labrador-collie cross.

Roger was a talented musician, a faithful, helpful, loving husband, a kind father to Ross and Lynne and devoted grandad to Jasmine and Leyna. He will be sorely missed.