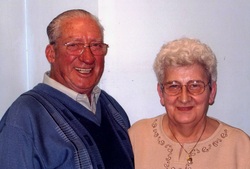 Obituary
It’s not often you can pinpoint the exact day when you met someone who was to become a lifelong friend, but in the case of Jack Gray I met him for the first time on the opening night of the Lesmahagow Accordion and Fiddle Club on 1st November 1979. At the age of 50 Jack had recently been forced give up his band work due to arthritis. Jack’s signature tune was ‘The Darktown Strutters Ball’ and most of his work was what we would call ‘modern ballroom’  - quicksteps, slow foxtrots and modern waltzes - all of which he loved, but it was the fact that he could no longer play an Eightsome Reel when traditional dances were required which decided him to stop gigging. In a sense it was a measure of his professionalism – he could no longer guarantee to do the whole job so he retired graciously.

He already attended Biggar Club as a listener and determined to open another one locally. Lanark couldn’t provide a venue at that point so Lesmahagow it was. And like everything he did, ‘Big Jack,’ as he was soon known to everyone, ran it with enthusiasm. Forced to retire early from his work as a dairyman in October 1980, again because of arthritis, he was able to devote even more time and energy to the Club.

Early Days
Jack was born in the Lanarkshire mining village of Riggend, near Slamannan, on 14th May 1929, the second eldest in a family of six, at the very start of the ‘Great Depression’. Although his father was a miner, on leaving school on his 13th birthday (with the special permission, indeed gratitude, of the local Education Board!) Jack opted for the only alternative in the area – as a farm worker. And that was the career he followed for the remainder of his working life, barring two short spells in the pits, the first when it was the only work available and the second in 1947/8 when he opted to be a ‘Bevin Boy’ down the mines rather than endure the discipline of the Army for his National Service. Even in these brief forays underground, during which he worked as a ‘drawer’ for his dad, the ‘hewer’ who ‘won’ the coal with a pick, they were twice trapped behind roof-falls and had to be dug out. It was with a sense of relief that he returned to farm work. In those grim days of the 30’s he was also hospitalised on separate occasions by scarlet fever and spinal meningitis.

Music
It was at the age of 11 that Jack got his first taste of the music world when he saw a melodeon in a shop window in Airdrie and did odd jobs, frantically saving every penny he earned to buy it. Having accumulated the required sum however, he was devastated to turn up at the shop to find out it had been sold. All was not lost though, because on learning of his desire to own a melodeon, his Uncle Jimmy dug one out of the back of a cupboard in the family home! At the age of 14 he bought a piano accordion and for a year went to Glasgow on the bus and tram for lessons every Wednesday with Toni Verrichia, a well known and respected accordion teacher who also ran what was known as ‘Toni Verrichia’s Number 1 Accordion Orchestra,’ although he wasn’t too enthusiastic as it was mostly classical.  Toni chastised his pupils by rapping them hard over the knuckles with a cane. Jack, a keen participant in the local amateur boxing clubs of the day favoured by the Lanarkshire mining communities, left Tony in do doubt about where this practice was going to lead!

One day in 1946, he left Toni’s to visit his mum who was in hospital. His dad was there visiting too and he told his parents he wasn’t going back for any more lessons. By one of those quirks of fate the conversation was overheard by Hilda Slaven who was in the next bed. It transpired that Hilda was also an accordion teacher, based in Glasgow, who offered to teach Jack when she got out of hospital.  Jack wanted to play in a dance band, so he went to Hilda for lessons for about a year, making rapid progress this time. He also played the drums, eventually following members of his family into Glenmavis Pipe Band. His father, and brother Wullie, played the pipes (Wullie later joined the Cameronians), his sister Nessie a tenor drum and brother Jimmy, along with Jack, the side drum.

Byretown Farm
Jack also had a passion for speed and like many a working man he owned a succession of motorbikes and took part in the Isle of Man T.T. on a couple of occasions – a particularly hazardous pursuit. That came to an end in 1950 when Jack married Jean Marshall from Belfast, a marriage that was to last for 62 happy years. In August 1952 they moved to ‘Byretoon’ Farm near Kirkfieldbank, Lanark where Jack was head dairyman and Jean washed the ‘milk dishes’ as they were known. In 1954, at the age of 24 Jack joined Tommy Rae’s Band, with Tommy and Jack on accordions, Willie Girdwood from Lanark on cornet and Willie Simpson from Crossford on drums. The band were together for around two years and only split up when Willie was called up for his National Service. Within a few months, Jack was asked to join The Carlton Quintet with himself and Tony Woodage on accordions, Ena Wilson from Elvanfoot (later of Lothian SDB fame) on piano, Billy Veitch from Lanark on guitar (who emigrated to Canada and was replaced by Leadhills fiddler Kenny Wilson) and John Train on drums (who was then later replaced with Johnnie Nichol, father of well-known present day Loanhead pianist Jim Nichol). The band played gigs all over the Borders region including once a month in Dumfries Drill Hall.

A three piece followed with Dan Bryson on accordion and Tam Baxter on drums, then a two piece with drummer John Simpson from Forth. Eldest son William, aged only 11, then joined the band on guitar and keyboards for six years and when he left to join a ‘beat group’ Jack’s final pairing was with drummer and comic Jack Grant, also from Kirkfieldbank.

Retirement
Jack had always had an interesting and busy life as a local accordionist. From the 1950’s to the 70’s he did a huge number of small mid-week jobs for Rurals, Guilds, and anyone else who needed music for dancing. The money wasn’t good, in fact it was almost a case of playing for your supper, your petrol money and the pleasure of it, but the spin-offs were considerable. All the ladies who attended these wee meetings realised how good a player Jack was and booked him for their sons and daughters weddings at weekends or recommended him to friends. Consequently Jack’s diary never had a free week or a weekend. He was an early advocate of the electronic accordion which he used in conjunction with a Lesley Tone Cabinet which contained a revolving speaker and produced a marvelous sound.

When he retired in 1980 Jack took a part time job as a salesman with ‘Electronic Accordions’ of Motherwell. As well as having an excellent range of acoustic accordions they had the franchise for the new Zero Zette electronic accordion. The local Manager, Joe Vettraino, adopted the traditional ‘wait on the customers coming to us’ approach but Jack was on commission and pioneered the ‘take the box to the players’ approach by hiring hotel function rooms for afternoons and evenings, particularly at events like the Newcastleton Festival, and demonstrating and selling accordions. The innovation was immensely successful and it gave Jack immense satisfaction to report his sales figures to Head Office down south. In that pre E-bay era he also developed a profitable sideline in buying and selling small accordions.

He also started teaching the accordion and the keyboard, not with a view to taking pupils down any technical, classically based route but instead directing them towards learning practical skills which would enable them to play in dance bands. Two of his pupils names stand out above the rest – Peter Wood and grand-daughter Pamela Gray.

Community Spirit
And so that brings us back round to the Lesmahagow Accordion and Fiddle Club. As well as Chairing it successfully for 26 years, Jack and Jean were Chairman and Secretary of the Kirkfieldbank Old Age Pensioners Association for even longer. This involved organising 4 annual day outings, an annual week’s holiday down south, a big Christmas party and innumerable fund raising and entertainment events in between. But all of this they did with enthusiasm and professionalism and it was undoubtedly of great sorrow to both of them that both organisations closed when they eventually took their final retirement in 2005.

In one sense the final chapter of the Jack Gray story finished with a large gathering of friends and relatives at South Lanarkshire Crematorium on Friday 25th January, 2013 but really the story lives on through his family and his many pupils, the Peter Wood’s and the Pamela Gray’s who carry the music forward to the next generation.

Jack’s final days were not easy ones, but he displayed the same fortitude he had displayed all his life. Wife Jean, daughter Mary, son Alex and grand-daughter Pamela thank all those who attended the funeral or sent cards and messages of sympathy. We offer them our deepest condolences. ‘Big Jack’ will be sorely missed but never forgotten.
CT 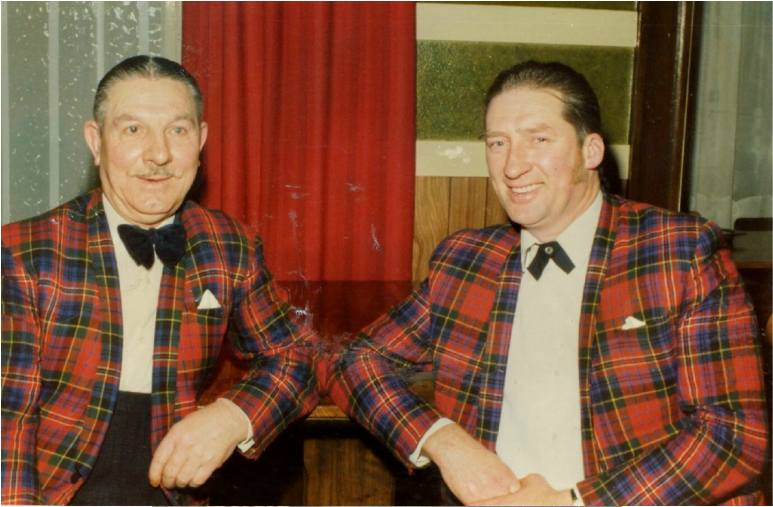