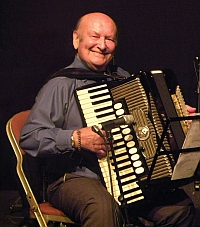 Jim Halcrow did not touch an accordion until he was 17½ when, in 1951 he had saved the necessary £22 to buy a second hand Alvari 80 bass from Forbes of Dundee - his first box. He then taught himself how to play it, and within a year he was playing in what was to become Shetland’s top band for the next fifteen years - “The New Players”. In 1972 Jim took himself off to college in Newark to train as a piano tuner. The box had, of course, accompanied him to England and he was not without offers at the end of his training, but thankfully returned home to live and work. Jim’s most treasured musical memories include the tours with his pals in the Hamefarers Band,  the visits (in the 1960’s) of the original Ian Powrie Band’, the trip which he, Willie Hunter and Ronnie Cooper made to the 2nd Mull Festival and a performance at the Lorient Festival in Brittany with Alistair Hunter and the Lorne Band.