Editorial
My apologies to the Highland (Inverness) Club. The wrong address was given for their new Secretary. It should be Mrs Mary McKenzie, 52 Innes Street, Inverness Tel. 0463 37370.
Welcome to yet another new Club, Forres, their Secretary in Mr Ray McKenzie, 19 Anderson Street, Forres, Morayshire.
There is also the possibility of another new Club, this one may be at Banchory, see article. There are two Clubs worth a mention. Cumnock, for their efforts at Hogmanay, a good public relations exercise, and Galston, for their donations.
A note for Secretaries and Advertisers ; please, only black and white photographs and illustrations, they turn out much better in print.
I have heard on the grapevine that fine button box player, Billy McGuire, is back in circulation, solo or group. Telephone Johnstone 22440.
Please note that there is to be an Extraordinary Meeting in Perth on 19th February. This is to see if we can put the ‘Box and Fiddle’ on a more permanent footing. A large turnout of Club Executives is requested.
Some Clubs want to know what the circulation of the paper is. The first Edition was 1,500, it is now 2,300. It could be much more but a balance has to be struck financially. 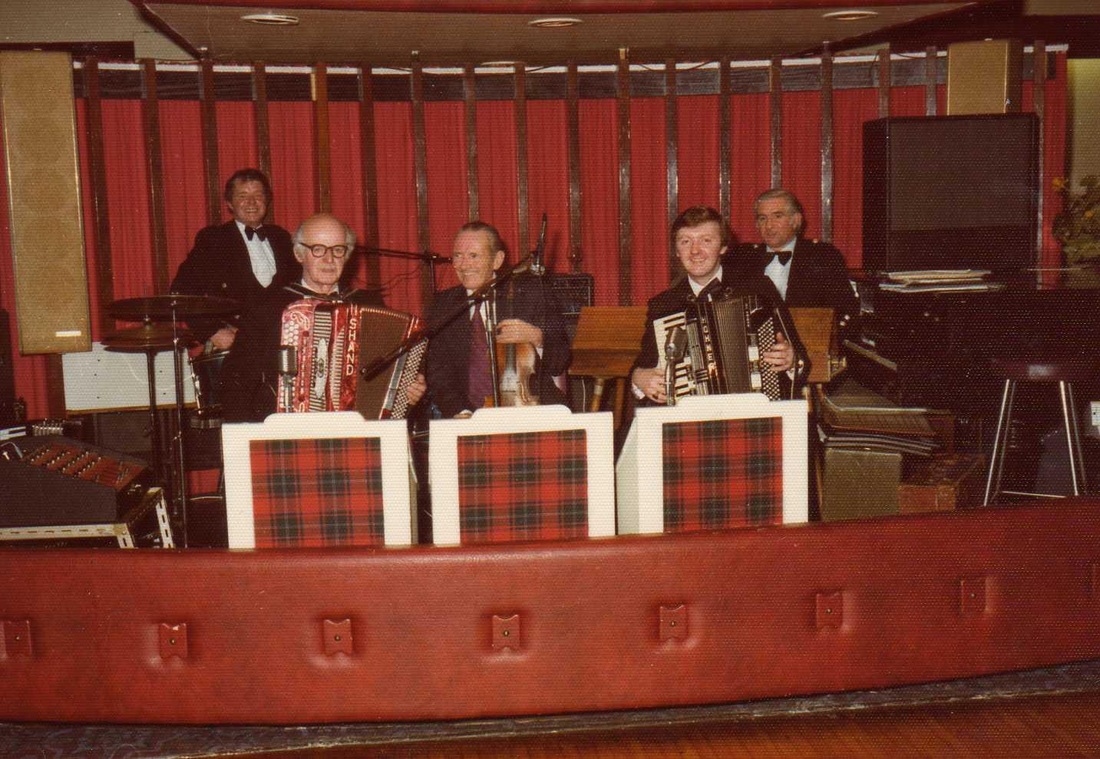 The ‘interval’ band at the recent annual Dinner Dance of the Dundee and District Accordion and Fiddle Club (Jack Cooper, Jimmy Shand, Angus Fitchet, Arthur Spink & John Strachan)
New Club – Banchory
An Accordion and Fiddle Club may be formed in Banchory, Kincardineshire.
Supporters of the idea from Banchory Strathspey and Reel Society are to get together on Monday, 23rd, January, at the Burnett Arms Hotel, Banchory, to hold a trial at which the guest artiste will be accordionist Jimmy Blue, Chairman of the N.A.A.F.C.
If the evening is a success, a Club will be formed and a Committee appointed.
H. McK

First Night at Forres
The new Club at Forres, Mpray, is having its first night on 25th January (Burns’ Night), which is a good night to kick off with.
The venue is the Brig Motel, Forres, and the first guest artiste is last years Scottish Accordion Champion, Graeme Mitchell.
This new Club has a Steering Committee of ten local artists and below are three who are on the telephone.
Chairman – Andy Ross, Kinvarra, Little Crook, Forres Tel Forres 2316
Ian Anderson, Dkkeside Cottage, Alves, by Forres Tel Alves 697
Ian M. Armour, Laneholm, Sanquhar Terrace, Forres Tel Forres 2561
Ian Anderson and his Band will start the evening off, which will be quite something. The Committee extends their welcome for any player who arrives on the night to get the Club off to a great start.
The ‘Box and Fiddle’ also wish Forres Club much success and many happy hours of music and hope that the neighbouring Clubs will rally round.

Fiddlers Galore
About 100 fiddlers drawn from Aberdeen, Banchory and Elgin Strathspey and Reel Societies will be on stage at H.M. Theatre, Aberdeen for a week from 20th March for ‘The 1978 Fiddlers Spectacular’.
The organising has been done by Bill Smith, Secretary of the Banchory group. The massed fiddles will be conducted by Sandy Diack Jnr, Aberdeen, with Bill Brian, Elgin, leading the group and Mary Milne, Banchory, will be accompanist.
Guest singers will be Anne and Laura Brand and Evan Cattenach, Elgin. The dancers will be Brian Seivwright, Isobel James and Joyce Anderson, Aberdeen with Robbie Shepherd, Aberdeen providing the comedy.
The guest fiddlers will be Angus Cameron, Kirriemuir (Monday, Tuesday & Wednesday) and Yla Steven, Edinburgh (Thursday, Friday & Saturday).

Beith Trios Competition
At the December meeting of Beith and District Accordion and Fiddle Club, 150 members and friends enjoyed the performance of guest artists Davy Stewart from Kirriemuir, who also brought pianist Bill Cormack from Blairgowrie.
This meeting was also the annual Trio Competition, and members were delighted to have seven entries from various surrounding Accordion Clubs.
The following trios competed :
Bobby Stewart (Galston)
Ronnie Easton (Galston)
John Loch (Straiton)
Kenny Thomson (Cumnock)
David Scott (Beith)
Jim Stewart (Beith) and
Alex Jamieson (Beith).
After a very difficult job of judging, the adjudicators who were Davy Stewart and Bill Cormack (our guest artists) determined the following results. Winner of the Willie Wilson Cup and Minatures – Ronnie Easton Trio. Runners up – Kenny Thomson Trio who received minature shields.
The other Trios’ marks followed very closely indeed, and to all who entered for the competition the Committee would like to thank them most sincerely. Their support is very much appreciated.
At the time of going to press the Club is looking forward to having as guest on 16th January, Arthur Spink, from Dundee. Arthur has appeared at Beith Club before and he is always very welcome and a very well received guest artist.
On 20th February, the guest artist is the Irish Accordion Champion Paddy Neary, who is doing a tour of some of Scotland’s Accordion Clubs.
Do give us a visit at Beith and District Accordion and Fiddle Club.
Willie Wilson

Fiddling Tip
By Angus Fitchet
Our local Secretary asked me if I’d car to do an article on my life as a fiddle player, but it needed no hesitation to say, “Gee whizz Jack, how can I possibly span 62 years in a short article?” There is so much to be written it would take me a long time and a great many pages to write my ‘story’. The boys I’ve met , the laughs we’ve had, the sad nits, and most of all, the rough life travelling about with the broken down cars. But in all these years I was only late once for a dance due to a breakdown.
Rather than write about me, I would like to give the up and coming fiddlers some tips on playing etc. First of all your violin, it should be treated with the greatest of respect, as this is your bread and butter. A violin is almost human and should be treated as such.
Before and after I play it, I dust it to get all the resin off, if resin gets into the pores of the wood it kills the vibration, so make sure you clean it, not forgetting the bow. When not in use the bow should always be clean and shining and screwed down, otherwise it will begin to warp and go out of shape.
Back to the violin. Invest in a good set of strings, such as ‘Thomastie’ or ‘Pirastro’ (don’t buy cheap ones). Next, a good bridge, and it must sit exactly between the two nicks in the centre of the sound hole. If you can’t fit it yourself I’m sure some friend will do it for you. There is a bridge on the market called De Jacques, it has self adjusting feet and fits flush to the belly of the fiddle instantly. If you can’t get one locally the address is J. Thibouville – Lamy and Co, 44 Clerkenwell Road, London EC1M 5PS. Ask you dealer to get one from this address of write yourself.
Whether or not you have a good case or a bad one, make sure the fiddle fits in snugly. Where the scroll and neck rests I have a face sponge placed in it to make sure the neck is resting comfortably and I always cover my fiddle with a yellow duster to keep out the damp. If you fiddle does not fit at the sides of the case, break up another sponge and place the bitsin various places to ensure the fiddle does not rattle in any way. You will find you fiddle will be in better tune when you take it out to play as it is now cozy and kept warm.
Before you play it at any time make sure you wash you hands (like a doctor before an operation).Keep your nails short otherwise you will make holes in the fingerboard. Now we are all set.
I know some of you work very hard in daytime, so you don’t have the same time and your fingers are rough and sore, but don’t despair, I only practice an hour to and hour-and-a- half a day. To learn to produce a tone I find if I play long notes and learn to keep the bow going, not pressing too hard, one note with the bow and count 25 to 30 slowly from heel to tip. Through time and practice you will find it will come easier and the tone will be steady and clean.
Divide the bow first of all in half (I don’t mean saw it or cut it up) but place a mark with chalk or paper and then you will have an upper half and a lower half, later on we have to do the same again and then we have upper, lower, point and heel.
Practice easy tunes with different parts of the bow, I myself could play a whole jig with the heel of the bow and then repeat it with the point (through practice). I must emphasise in your daily practice you can’t play enough scales and exercises. There are plenty of books to choose from and can be had from any dealer. Don’t after you learn two or three tunes think you are a fiddle player, one must persevere and strive for greater things. I would rather play my fiddle any day than be watching the TV or drinking. There is a time for everything, by the way, I’m sorry but I’ll have to go and practice so Cheerio Friends.