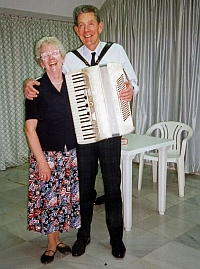 Born in 1927 in Montrose, Norrie was destined to spend twenty years of his working life in Bedfordshire. It was there that he met Sheila Jack, originally from Elgin, who worked for the same organisation. They complimented each other perfectly with Norrie spending some of his spare time playing for Scottish Country Dance classes and Sheila, a keen dancer, becoming a qualified SCD teacher. It was 1970 before they were able to move back north of the border when Norrie took a job at the National Engineer Laboratory in East Kilbride. He then immersed himself in the culture from which he had been isolated for so long, competing successfully at Perth and Musselburgh and regularly attending the MAFIA (Milngavie Accordion, Fiddle and Instrumental Associates). This in turn led him to take an interest in the NAAFC and in 1980 he was asked to take over the Chair of the Musselburgh Festival Sub Committee which he did with the willing and able assistance of wife Sheila as Secretary. Under their guiding hands the Festival developed into the marvellous event we know today. The Association are due a huge debt of gratitude to Norrie and Sheila for all the hard work, enthusiasm and inspiration they gave in their respective roles.